Mizoram is one of the seven Northeastern sister states sharing a border with Assam, Manipur, Tripura and an international border with Bangladesh and Burma. Mizoram means “land of the hill people”, mi means people, zo means hill and ram means country. Aizawl is the capital city and people of Mizoram are called the Mizos and Mizo is the official language. Majority of the Mizos, 87% are Christians, Hindus are the minority with only 3.6% and Buddhists around 8 – 9%. After independence, Mizoram, Meghalaya and Nagaland were part of Assam. Later, all three states were carved out of Assam on ethnic and linguistic basis.

Cuisine of Mizoram is similar to that of its other northeastern sister states and different from most of the mainland cuisine. Rice is a staple food served with fish chicken, pork or duck. Meat and seafood are added to pretty much everything that is cooked. Mustard oil is used for cooking. Very little oil and spices are used and food tends to be bland. Popular dish is bai, similar to stew, prepared by boiling spinach with pork and bamboo shoots. Sawchair is another common dish made of rice and pork or chicken. Vegetables are also used extensively unlike the common belief that Mizos eat only non-veg. 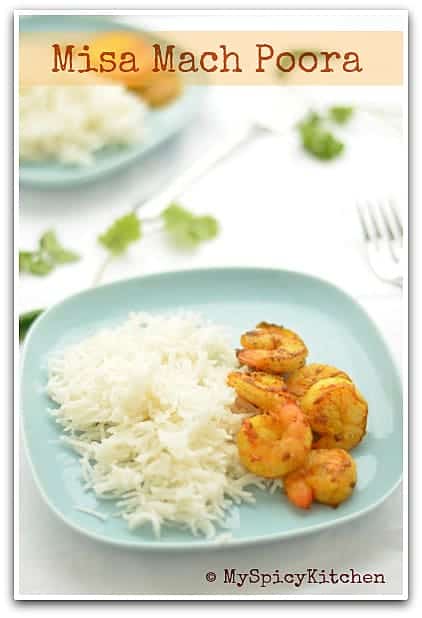 This was one of the northeastern cuisines which was very difficult to find a recipes from. Very little is known about the cuisine and very few online resources. The few sites that had info about the cuisine are questionable. My today’s recipe is one such recipe. Some of the sites listed Misa Mach Poora as a Mizo food; one had it as Assamese and another as Meghalaya food. When I checked a month ago, Wiki also listed it as Mizo food and I went ahead with the preparation as this looked like a recipe I would like. At this stage of the blogging marathon preparation, I had cooked only one shrimp recipe and did not have any other shrimp recipes list for rest of the states. Since I like shrimp and I was the only one going to eat it, decided to cook this. However, when I checked wiki over the weekend when writing this post, this dish is no longer listed as Mizo food. Since Meghalaya and Mizoram were once part of Assam, and since there are some similarities in the cuisines, I am sticking to this recipe unless someone knowledgeable and credible proves it otherwise. Also, 3-4 sites have a recipe for this dish and all the recipes are a copy paste from the original site. One, the recipe is word to word copy and two, all the sites had onions in the ingredient list and none mentioned it in the preparation.

Misa Mach Poora is shrimp grilled or roasted on open charcoal in banana leaves. I have no access to banana leaves and open charcoal, so I grilled it in a cast iron pan. It tasted like lightly seasoned grill shrimp. By the time I got to this northeastern state, I had already cooked three northeastern states and Mr.U refused to taste any more. That morning I had asked him again if he would be the taster and he refused. I cooked it for myself and was going to eat it all by myself. I had cooked it with another state and while I was taking pictures of the other food, he came home and ate most of it. 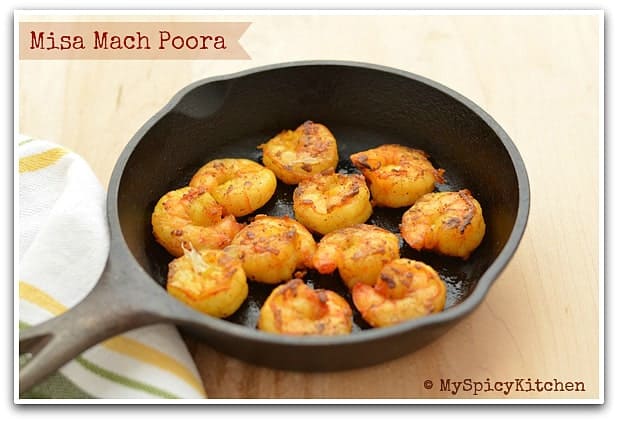 This day in 2012 - Dondakaya Gutti Masala