Karnataka is one of the four South Indian States. It is surrounded by the three southern states on the east & the south. To the north of Karnataka is Maharashtra, to the east is Andhra Pradesh, south east is Tamil Nadu, south west is Kerala, to the west are Arabian Sea and Laccadive Sea (Lakshadweep Sea), and Goa on the North West.   Karnataka was originally known as State of Mysore and renamed in 1973. Mysore is the cultural city and has a long history. Mysore was the capital of Mysore Kingdom for centuries and has a rich heritage and culture, and the city is known for its Dasara celebrations. Capital city Bangalore or Beguluru is the Silicon Valley of India.

Growing up I associated Karnataka with its capital Bangalore, the city of Mysore, Mysore Sandal soap and sandalwood. Bangalore & Mysore was one of the few school trips I went on. This was over 30 years ago and that was the only time I visited Mysore. All I remember about that trip is Maharaja Palace in Mysore, Brindavan gardens few kilometers from the city of Mysore and Mysore sandal soap factory in Bangalore. 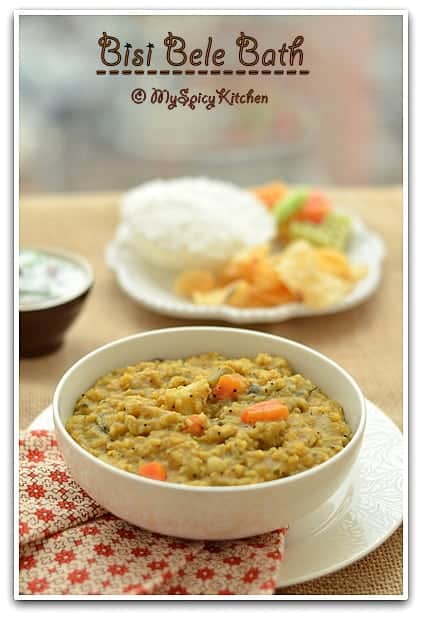 Cuisine of the state varies from region to region and is influenced by neighboring states. Rice and ragi are staple in the south, shorgam (jola) and rice in the north. Some of the popular dishes from the state are bisi bele bath, vangi bath (eggplant~brinjal rice), ragi rotti (finger millet pancake), akki rotti (spicy rice flour pancake), idly vada sambar, kesari bath, Mysorepak. Mysore masala dosa has its traces to Udipi, a town in the southwestern part of the state. Kodagu or Coorg region is famous for its pork curry and coastal region has many seafood specialties. And that pork curry is on my to try list and have also bookmarked couple of recipes. 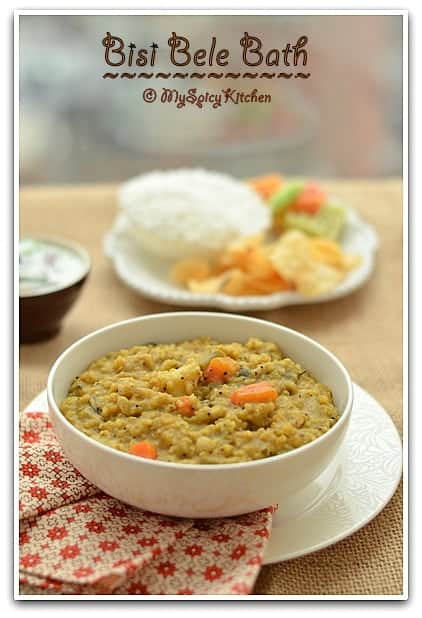 Although ingredients and cooking styles vary depending on the region, a typical Kannadiga meal (oota) includes kosambari, pickle, palya, gojju, raita, dessert, thovve, saaru, majjige huli, chitranna and rice. The traditional dessert served is paaysa. All the information about the cuisine is from wiki and more I read about the different food, the more confused I got. I called up one of my Kannadiga friends and she explained the difference. Palya is a vegetable stir fry, with simple tadka and spice powder such as vangi powder is sprinkled for additional flavor. Gojju is a sweet and sour tamarind based curry, similar to pulusu from Andhra cuisine. Huli is sour gravy with vegetables and lentils, similar to sambar. Huli is also prepared with yogurt or buttermilk and is called majjige huli and, only vegetables are used in this and no lentils. Saaru is rasam. Coconut is used in almost all the preparations and it can be fresh or dry coconut, although fresh is preferred. Little bit of jaggery is added to almost all the preparations such as to saaru, huli and gojju, especially in the Mysore region. Oh, I forgot to mention kosambari is a salad. 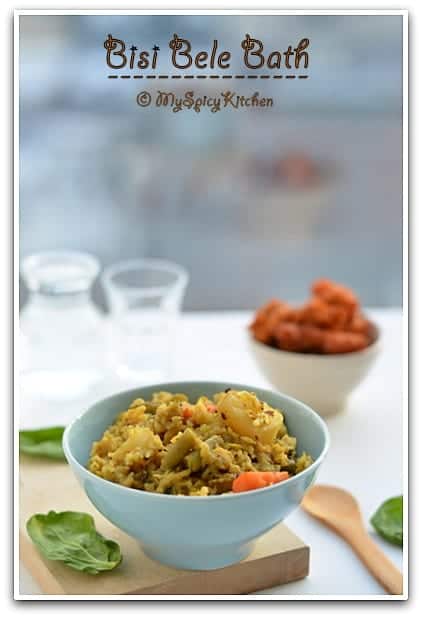 To showcase the cuisine of this state I chose bisi bele bath (BBB), a classic dish from Karnataka. BBB always reminds me of the BBB that I ate at my cousin's place some 19+ years ago. During that visit, my cousin's co-sister prepared this delectable BBB that I can never forget. After that, nothing matched her BBB. It was so long ago and now I don't remember how it tasted except for the fact that it was the best BBB I had ever eaten. When I was looking a dish for this state, I could not make up my mind. One day as I was casually searching for Kannidaga cuisine, I landed up on Vani's blog. In one of her posts, she mentioned that her BBB is the most popular post on her blog. So it was decided, BBB from Vani's blog it is, for Karnataka!

If you noticed my BBB photos, you might have already guesses first two were taken on one day & the last two on another day. Yes, I made it twice and loved it both the times. The first time I made it, I cooked BBB for 5 whistles in a pressure cooker and it was too soft, even the vegetables were overcooked but it tasted awesome. The second time I made it, I followed the directions and cooked it for only 3 whistles. Yet, my BBB didn't look the BBB in Vani's pictures. I used basmai rice and wondered if that had anything to do with it. It did cross my mind when I was preparing it but that is the only rice I use everyday and I went ahead with it. I left a comment to Vani and she replied back that regular rice is to be used and not basmati rice. Next time I will cook it with regular rice. Nonetheless, this recipe is a keeper. And Mr.U who doesn't really like any other rice preparations except biryani, pulao and fried rice liked the BBB both the times I prepared it. 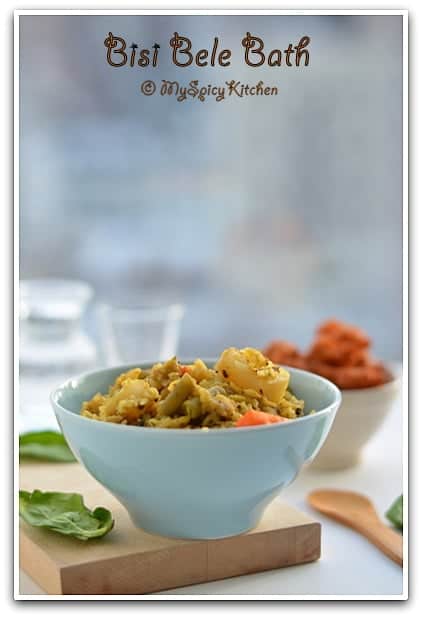