This month Food of the World is in Norway. Norwegian cuisine is largely based on fish, game (hunted animals such as moose, reindeer, duck to name a few), preserved meats, dairy products and fruits. Waffles, pancakes and breads are staple food. Cardamon is a common spice used for flavoring. I did not have to do much research to pick a dish for this country. Lefse, a flat bread made with potatoes and flour was on my to try list for sometime. Lately, we have been eating lot of potatoes and drop the idea of making lefse for now. Julekake, Norwegian Christmas cake is also on my to bake list but put it off for later time. My next choice was pancakes followed my rice porridge or rice pudding. I ended up making rice porridge or risgrot. Risengrynsgrot or Risgrot (shortened name) is a rice porridge traditionally prepared during Christmas Eve. The leftovers are then used to make rice pudding ~ Riskrem by adding some whipped cream, more sugar and red sauce. There are many recipes online for Norwegian rice porridge and there is no right or wrong way to prepare this porridge. Traditionally a small or medium grain rice is used and since I had none, I used Paella rice which is kind of short to medium grain. Short and medium grain rice is starchy and makes a creamy porridge. This porridge is not very sweet and I added more sugar to my taste. I referred to this site for information on Norwegian rice porridge. 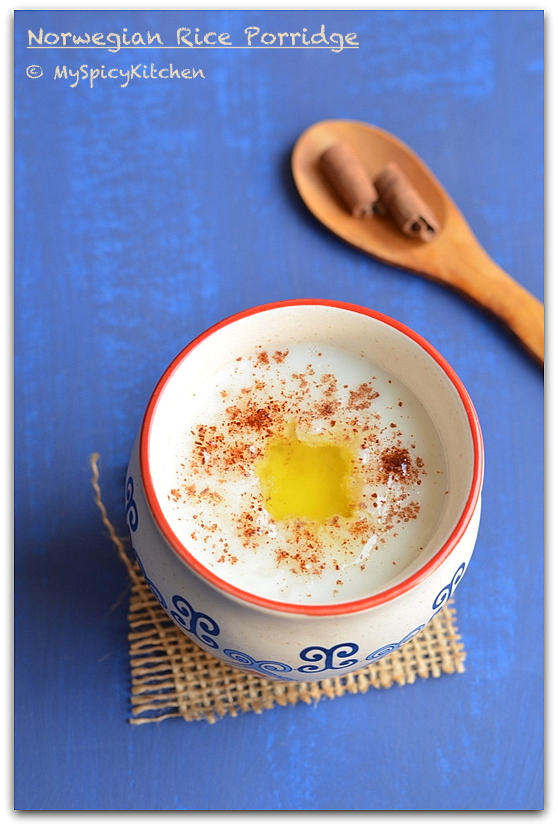 Please add your Norwegian recipes to the linky below and visit my co-host to see what they are cooking.