Glazed shitake mushrooms is a delicious Thanksgiving side dish. Mushrooms cooked in a seasoned soya sauce and served on a bed of bok choy.

Every Wednesday, New York Times has a food & dining section where they talk about food, restaurants and share recipes. This past Wednesday’s edition was “The United States of Thanksgiving” and had numerous recipes.

One of the recipes that piqued my interest is this glazed shitake mushrooms with bok choy. I had initially planned on cooking something else for this week’s CCChallenge but after seeing this recipe, I thought if I am going to make it for CCChallenge, I might as well do it before Thanksgiving.

I made half the recipe and followed it as given. The only change or rather only ingredient I left out is sugar. And I substituted Chinese chilies with Indian red chilies. Recipe looks lengthy but it is not. The only time consuming part of the preparation is boiling water to blanch bok choy.

Mushrooms are sauteed or stir fried in a hot pan and served over a bed of blanched bok choy. I served it with some white rice, grilled fish and some curry. Obviously it did not pair well with the curry but it was good with fish & white rice. I ate it as it is, without mixing it with rice.

When I take pictures, I like to take my own sweet time to set up and shoot at my own pace. Since I made this for lunch today, I did not have much time and took a very quick picture. I did not even check my settings. Luckily, the above image is not that bad. 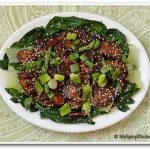