Jammu & Kashmir is the northern most state of India which shares a border with Himachal Pradesh and Punjab in the south and an international border with China & Pakistan in the East, North East and Pakistan in the west. Jammu Kashmir consists of three regions; Jammu, Kashmir and Ladakh. Srinagar is the summer capital and Jammu is the winter capital of the state. Kashmir is beautiful with its mountain landscape and Jammu has many Hindu shrines. Ladakh is scantly populated region of the state that lies between the Kunlun mountain range and the Himalayas. The culture in this region is similar to that of Tibet and is mostly inhabited by Buddhists.

Kashmiri cuisine is influenced largely by the Kashmir Pandits and the Buddhists. Later the cuisine was influenced by the Persians, Central Asians and the Mughals. Most of the Pandits are non-meat eaters but the Kashmiri Pandits are an exception. Meat is an integral part of the cuisine however, beef is forbidden and Muslim Kashmiris respect this as well and follow the Kashmiriyat. Kashmiriyat is the ethnic, social and cultural values of Kashmiris. Kashmiri Pandits cuisine uses lots of yogurt, oil and spices such as red chili powder, ginger powder, fennel and do not use onions and garlic. 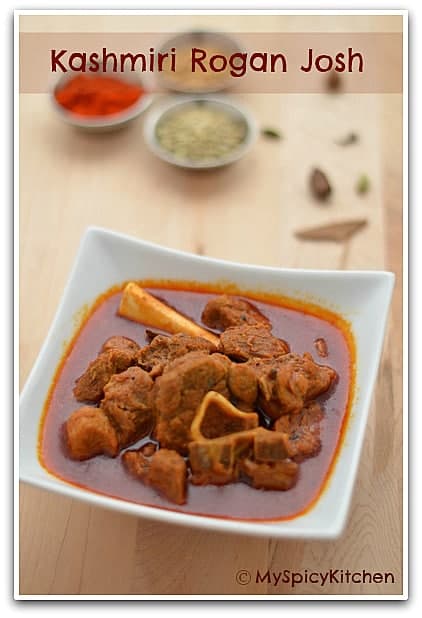 Wazwan is a multicourse meal in the Kashmiri Muslim tradition. Almost all the dishes are meat based and beef is generally not served in Srinagar area but is cooked in other districts of the state. Some of the popular dishes from of the state are Rogan Josh, Yakhni a yogurt based lamb gravy, Rista a gravy with meatballs, Syoon Olav ~ meat with potatoes, Syoon Pulav ~ meat pulao, Dum Olav ~ whole potatoes in a spicy gravy are a few name. Tea is also an integral part of Kashmiris. It is often served in place of desserts. Some of the popular flavors of tea from this region are Sheer Chai, a salted tea with almonds and Kehwah a sweet green tea with almonds and cardamom.

Deciding a dish for this state was an easy task for me. I first thought of Dum Aloo or Dum Olav but soon changed it to Rogan Josh. I decided on the dish without even doing any research on the cuisine. When I was looking for Rogan Josh recipes, I came across many recipes and almost all the recipes used yogurt but onion was also part of the ingredient list. But the ingredients that caught my attention were almonds in some of the recipes. I knew no matter which recipe I followed, with or without almonds, I knew it would taste good. Also other ingredients were onions and poppy seeds. Some recipes used it and some did not. That is when I started researching about the cuisine and found that traditional Kashmiri Pandits do not use onions and nor do they use almonds and poppy seeds. Off course the Rogan Josh is such a popular dish that the recipe has transformed over the years to suite the palate of the people. In fact, I was surprised when more than half the results on the first page of Google search were from non-Indian sites and blogs. That explains how popular this dish is worldwide. Anyway, I was glad I did some research on Kashmiri cuisine and that made it easy for me to shortlist the Rogan Josh recipe. And I think the recipe I chose is a traditional Kashmiri Pandit recipe. 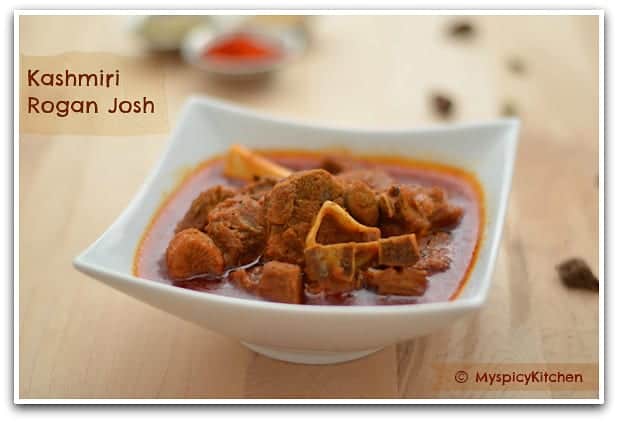