Today we are traveling to the Middle East to get a taste of Lebanon. The food in most of the Middle Eastern countries is similar with minor changes and Lebanese food is no except. Lebanese cuisine consists of whole grains, fresh vegetables, fruits and seafood. Chicken is eaten lot more than red meats. Olive oil, garlic and herbs are integral part of the cuisine. Some of the popular food from this nation are hummus, falafel, fattoush, tabbouleh, kebbehs and baklava to name a few. It was difficult for me to pick one recipe from this cuisine. I finally zeroed in on manakish, also known as manakeesh and manaqish and manousheh in singular form. It is usually eaten for breakfast and can be topped with herbs, cheese or meat. I used zaatar seasoning. It can be eaten as it is or can be served with some fresh vegetables. 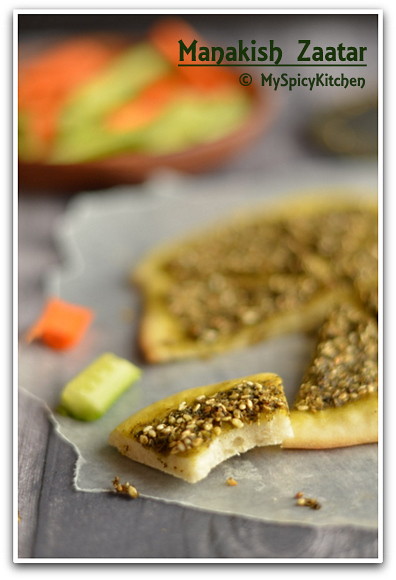 Zaatar seasoning is a blend of sumac, sesame seeds, dry thyme and dry oregano. Sumac is a common spice in the Middle East. It is dark reddish spice that has a lemony flavor and I must admit, I have neglected or ignored this spice for too long. Whenever a recipe called for sumac, I always left it out but not anymore! This was the first time I used sumac in my cooking and am going to use it a lot more from now on. 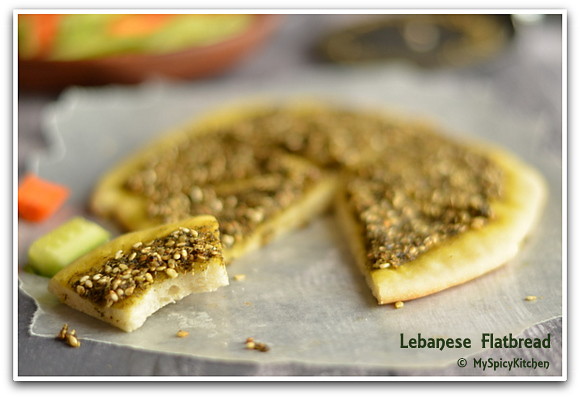 Zaatar seasoning can be made at home or can be bought from any Middle Eastern store, as I did. Here in New York, some of the local supermarkets sell sumac in the spice section if one wants to make the zaatar seasoning at home. The other ingredients required for the blend are common herbs which are available in any supermarket. I have listed the recipe for zaatar seasoning even though I used a store bought one. 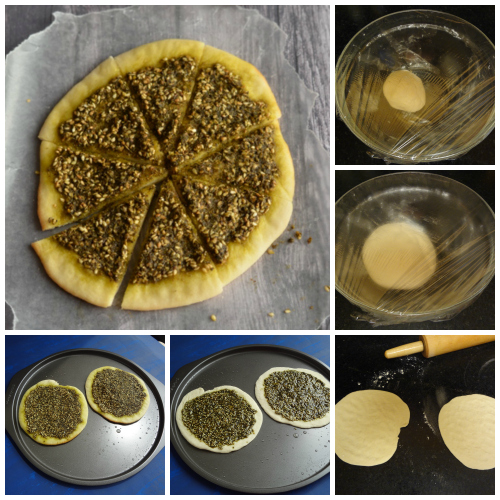 Zaatar Seasoning (This recipe yields around ¾ cup seasoning and will need only 1 ½ - 2 tbsp. for the bread)

Events - This goes to Bake Fest # 35 hosted by Nalini, an event start by Vardhini.