I like one pot meals, specially rice dishes such as biryani, pulao and other rice varieties that can be served with or without a side dish. Few days ago, this Raju Gari Pulao made rounds in one of the Facebook groups I am a member of. Almost everyone in the group cooked this pulao and posted pictures. I wanted to try it as well. The original recipe is with chicken. I did not like the chicken version, to be more precise, we did not like the chicken pieces though the rice was quite flavorful. This past Friday I made it with shrimp (royyalu in Telugu). We liked shrimp version of the pulao.

Please pardon the picture. I took the picture after dusk and was in no mood to click multiple pictures as there was insufficient natural light. For the past couple of weeks I was planning on click pictures of my dinner for this week's blogging marathon and that was quite a challenge. I had planned on showing you my daily dinner menu for this theme and currently we are trying to maintain a low carb diet and eat more baked or grilled food. I usually cook in the evenings just before dinner. It was a challenge trying to cook and click food before the sunset by 5pm, and also keep the food warm for dinner. I eventually gave up on baked and grilled food and went ahead with Indian pulao and curries. When I made the pulao, I could not get my setup ready before the sunset and hence the low lighting picture. Recipe for Raju Gari Kodi pulao was aired on one of the Telugu cookery shows last year by chef Venkat Kuchipudi. Venkat Kuchipudi is a Telugu movie director and also a foodie. He owns couple of restaurants in Hyderabad; Kitchen of Kuchipudi and Ulvacharu, and at least one in the Bay Area here in the US. Raju in Telugu is King and there is also a community by this name in Andhra Pradesh. Chef says this chicken pulao was neither eaten by the Kings nor is a preparation exclusive to the Raju community. He wanted a catchy name for his pulao and named it Raju gari pulao.

This pualo is prepared in a pressure cooker and the rice is on a softer and mushy side, unlike the grainy texture in biryani. The reason I liked this recipe is that there is no marination of meats or seafood and it does not require too much of prep time either. The only time consuming prep time is cutting the chicken or peeling & deveining the shrimp, depending on what is used. The other time consuming part of the preparation is roasting the onions in oil and then making a paste. But if we multitask, we can chop the herbs and do rest of the prep work while the onions fry in the oil. Once these two steps are done, the preparation is a breeze. My family does not like soft and mushy rice hence kept the rice grainy.

Below is the picture of Raju Gari Kodi Pulao that made 10 days ago. Though the pulao looks delicious and as I said earlier, the rice was tasty but we found the chicken pieces to be a bit bland. If using chicken, I would suggest using smaller chicken pieces than the big ones. I cut my chicken pieces big, as I usually do for chicken biryani. Another suggestion is, one could marinate the chicken with some salt, garam masala and may be even green chili paste. This recipe calls for green chilies and garam masala and chili powder is not used. Happy cooking Raju Gari Pulao.. 🙂 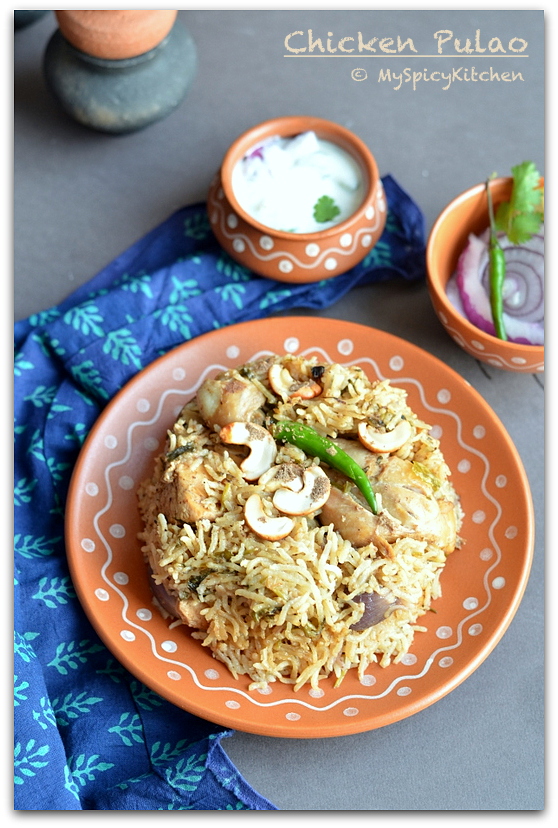