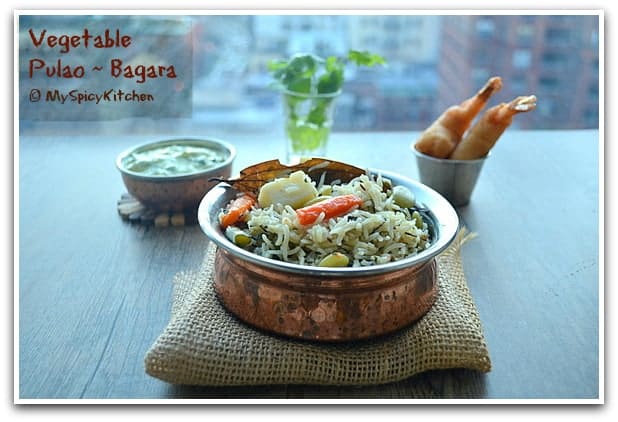 When Valli announced blogging marathon # 35, I right way decided my themes and one of them is Pressure Cooker Recipes. So for the next three days, I will be posting recipes that are cooked in a pressure cooker. When I say pressure cooker recipe, even the tempering is going to be in the cooker. I won’t be using any other pot or pan, but for the pressure cooker.  Well, I might use a another vessel to cook the food in the pressure cook, but not directly on the stop.

The first recipe under this theme is vegetable bagara. I already blogged this recipe here but since this is in a pressure cooker recipe, I am posting it again. I actually wanted to post a methi pulao recipe and I also prepared it. The weather in our part of the world is so bad for the past few days that we hardly saw the sun in the last one week. It either rained all day or was cloudy most of the day. I did not like how my pictures turned out hence posting this recipe which I made this Saturday.   These pictures a bit better than the methi pulao pictures.  Anyway, all my vegetable pulaos or vegetable bagara recipes are pretty much the same, except the vegetables that go in it. I had very little methi or fenugreek leaves to cook methi pulao again, so made this instead. I had some spinach which had to be used up right away, so threw some in it. The one thing I like about vegetable bagara is we can throw in any vegetable we like and it turns out good! 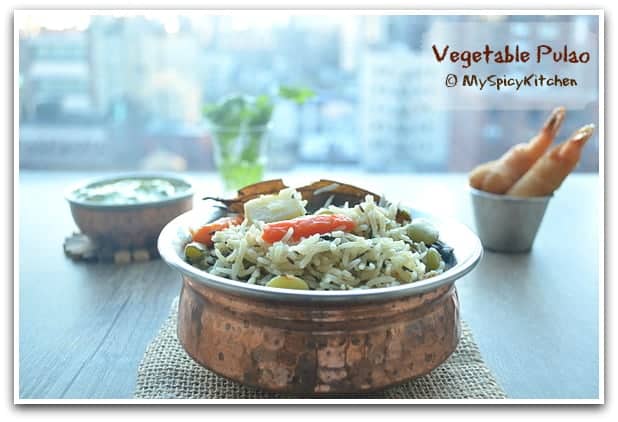 Ingredients:
The measuring cup used here is the one that comes with the rice cooker, which is 160ml.