Recipe for this edition of Cooking from Cookbooks Challenge is aloo bhujia or aloo sev from Ismail Merchants Passionate Meals. You must be wondering of all the delicious looking non-veg recipes, why this recipe?! I browsed through some of Ismail Merchants cookbooks in bookstores and in the library but never made any of his recipes before. This book was on sale for less than a dollar on amazon few weeks ago and bought it right away. Secondly, how can anyone resist such a bargain!!

Though the book has many non-veg recipes, since I bought the book recently, I did not explore the book. On weekends, it is usually biryani and on weekdays I don’t eat meat or seafood , now it is once a week. And on the rest of the days, I could not try any new non-veg recipes from this book. When browsing through the book, aloo sev caught my attention. It is knew to me and am glad I tried it. Both of us liked the sev.

Coincidently, this happens to be my Diwali snack. I also made slow cooker palakova or something of that sort a couple of days ago. Well, I am not going to post that recipe though! Preparation of palakova is another story but to keep it short, it turned into a thick version of condensed milk. It was edible and in fact, Mr.U liked it a lot.

What is Aloo Bhujia or Aloo Besan Sev

Bhujia or sev is a deep fried crispy thin vermicelli or noodles snack. Sev is prepared by pressing dough in a gadget called sev press to get thin vermicelli like sev. Dough for aloo bhujia is a mixture of boiled potatoes and gram flour seasoned to taste. To prepare and fry bhujia, press the dough directly into hot oil and I followed the recipe as given, adjusting the seasoning to my taste. This is an easy preparation and only time consuming part of the preparation is boiling and cooling the potatoes. Rest of the preparation is done in less than half an hour. Cooking time in the recipe depends on the size of the deep frying pan. If using a bigger pan, cooking time is less than 20 minutes.

Here is the color photo of the above picture. This is the sev I made the first day. 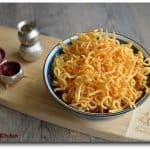 Events: Aloo Bhujia is my entry for Cook's Joy Diwali Bash and Priya's Diwali Delicacies which is co-hosted by Spicy Treats.