Sunday is a resting day for our blogging group which is on a month long “Around the World in 30 Day with ABC cooking”. I initially made Bandung for Malaysia and since it is such an easy recipe, I made something else for the letter ‘M’. You have to wait until tomorrow to know what that is. Since I already have this recipe in my drafts and since I posted a recipe last Sunday, thought of posting one this Sunday and the next two Sundays to make it a month long marathon. My posts on Sundays are not part of the international cooking marathon that I am doing this month. Bandung is a popular drink from Malaysia and Singapore. This is a popular street side drink and is also a favorite drink in Malaya community. It is served during iftar during the month of Ramadan. It is also served at weddings and celebrations. It is a simple drink prepared with condensed milk and Rose syrup. 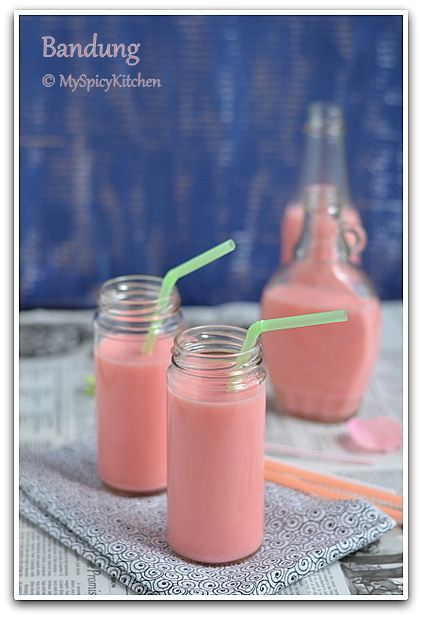 Rose syrup can be prepared at home from scratch and using an ingredient called pandanus. During my search for this ingredient, I found kewra water can also be used for pandanus leaves. I had initially planned on making the rose syrup at home with kewra water and abandoned the idea when also found that rose syrup is nothing other than roohafza. I took the short cut and used roohafza instead.

There are many ways to prepare bandung. It can be prepared with milk or condensed milk. If using condensed milk, sugar can be left out as condensed milk is sweet. Some recipes also called for using soda instead of water. Also, all the ingredients can be adjusted to once taste. I used 3 tablespoons of condensed milk and husband thought it was a little sweet but it was perfect for my sweet tooth.

Adapted from: here and Desi Fiesta