Today we move on from Rawalpindi in Punjab, Pakistan to Punjab India. For the third combo of the week, I have one of the most famous food combos from the state of Punjab, sarson ka saag with makki ka roti. This combo is favorite among the locals in Punjab, both in India & Pakistan. Saag is green leaf vegetable curry. Sarso is mustard and sarson ka saag is mustard leaves curry. Mustard leaves are seasonal and available only in winters. These leaves are bitter in taste and to mellow the bitterness, it is cooked with other leafy vegetables such as spinach. Bathua known as lamb’s quarters in english is also added to sarson ka saag along with spinach. Since I could not get my hands on bathua, I used only spinach. I made makki ka roti to go with the saag. I made it over the weekend for myself and had some leftover saag. That evening I had only saag and Mr.U reluctantly ate it with roti. He liked the saag so much that roti & saag was his lunch the following day. He kept on saying that he liked this green curry and would not mind eating it once in a while. Next time I make it, I will cut back on butter but wonder if it would taste this good with less butter 🙁 Saag was very spicy and please adjust the seasoning to taste and I substituted mustard leaves with broccoli rabe. Next day this was my lunch; roti, sarson ka saag, beans fry, sliced cucumber and onion. Below is the Instagram picture of my lunch. 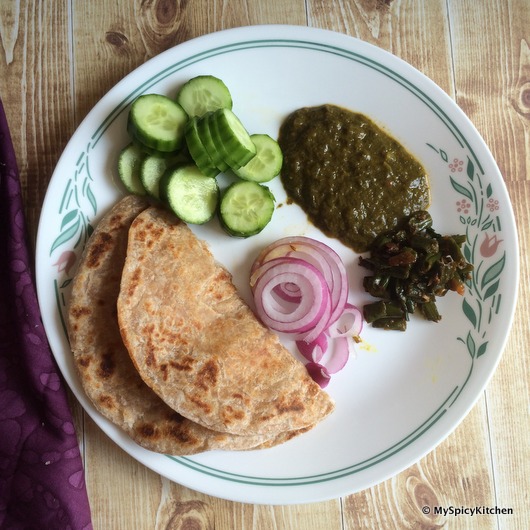