For F, I initially thought of cooking some French food. As I was looking for other cuisines, Finnish cuisine caught my eye. I initially did not consider this cuisine in fear that we might not like it and it might be bland for our palate. It was quite interesting reading about Finnish cuisine. There are certain dishes that are served on specific days. When I looked up this cuisine, I wanted to try their pea soup which is served on Thursdays. Mr. U did not show much interest and dropped the idea.

The other dish I wanted to try was fennel cake. I always thought fennel cake was a North American dessert that is usually prepared at fairs and carnivals. I was surprised to read that it is equally popular in Finland and is traditionally served during May Day celebrations. I wanted to try fennel cake which requires deep frying and I usually avoid deep dried dishes. And for this marathon, only self imposed clause is no deep frying and no desserts. Hence had to drop the idea and chose this simple breakfast. 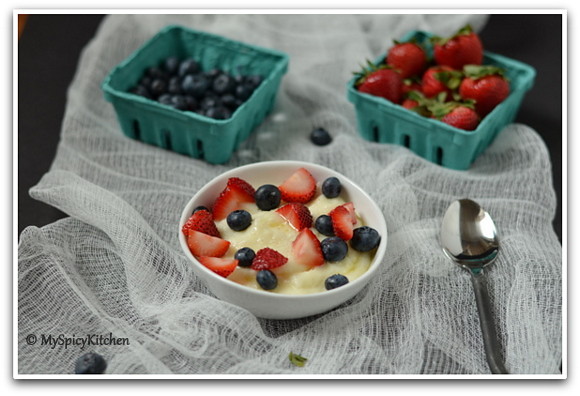 Porridge is a dish made by boiling milk or water with oats or grains. Porridge can be sweet or savory and oats porridge is quite popular in most of the western countries. In Finland porridge includes substantial portion of the breakfast. It is usually made of rolled oats or multi grains. But semolina milk based porridge is also an option which is served with some butter and lots of berries. I had plenty of blueberries and strawberries that had to be used up very soon. To use up all those berries, I made semolina porridge that is served with lots of berries. Semolina porridge is called mannapuuro ro manna porridge. 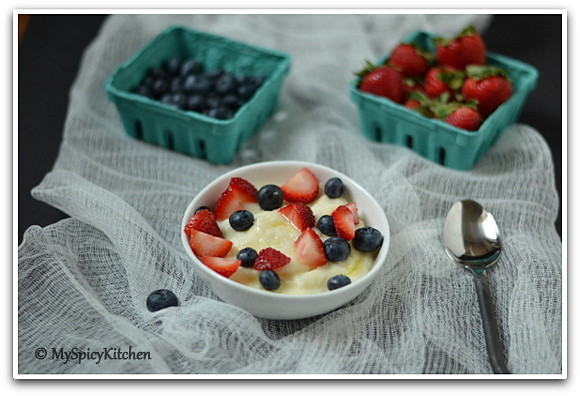