Gujarat is one of the western states of India with rich heritage and culture. State has a long history dating back to Indus Valley Civilization. The state shares a border with Rajasthan in the North, Madhya Pradesh in the East, Maharashtra in the South and, Arabian Sea & an international border with Pakistan in the West. Gujarat is one the most industrial states in the country and has a per capita GDP above the national average. Father of the nation Mahatma Gandhi, Sardar Vallabhbhai Patel, first deputy prime minister of India were favorite sons of the state. Lately, another favorite son of the state is the spot light. The current Chief Minister, Mr. Narendra Modi is the leading front runner in the prime ministerial race. India has a parliamentary system and Mr. Modi’s party is expected to win majority of the seats in the upcoming parliamentary elections.

I usually do not follow politics closely but my husband does; both US and international politics. But this year, he is has been super excited about the Indian elections and to add to that excitement, this time we have a 24 hour Indian News channel to entertain his interest. I do not even remember the last time he watched Fox or CNN in the last few months. I have never seen him this excited about Indian elections since I met him. 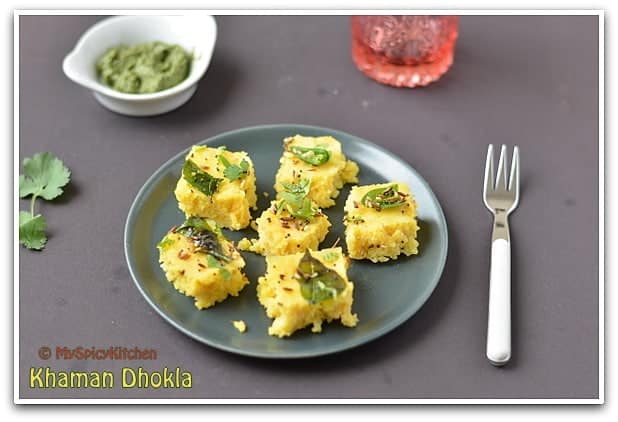 Last one month I have been on cooking spree preparing for this month long marathon. For Gujarat I had listed down as Dhokla and when I mentioned it to Mr. U, he wasn’t interested in it. He is not a big fan of idlies and dhoklas. He wanted me to make a curry, rather a shaak as it is known in Gujarati. So I changed the menu. The day before I planned on cooking for this state, I had mentioned it to him. The following day before leaving to work he tells me, so today is our Narendra bhai (brother) Modi's home state! Cook a good decent meal! And yes, I had planned to cook only Gujarati food for dinner, oondhiyu & poori that evening and unfortunately the recipe I followed failed me 🙁 It was a lengthy preparation and I was very disappointed. Since that was the only food I cooked that day, we had to eat it with very little left over gravy from previous night. After a disastrous day in the kitchen, I did not want to redo the same recipe. Few days later I decide to do an easy dhokla and he wasn’t interested in it. I promised I will cook a good Gujarati meal for him once Mr. Modi is sworn in as the prime minister of India. 🙂 And I am going to have 23 tried and tasted recipes to pick from after today. 🙂

Coming to Gujarati cuisine, this is a vegetarian cuisine despite having a long coastline. Very few communities living in the coastal area do eat seafood but that number is very small. There is more to this cuisine than just dhokla, khandvi, khakra and thepla. A Gujarati thali consists of roti, dal or kadhi, rice and shaak with pickles and chhundo as condiments, with a glass of chaas (buttermilk) and a sweet. Shaak is a subzi or a vegetable curry made of different combination of vegetables and chhundo is sweet and sour preserve made with grated mango. Most of the Gujarati dishes are sweet, salty and spicy. The food varies depending on the region. 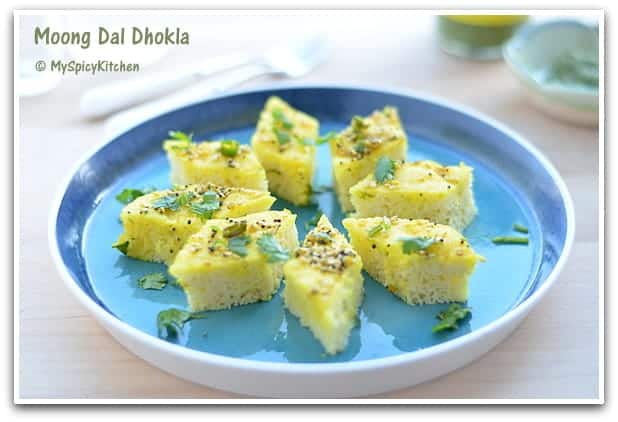 Will post the recipe for moong dal dhokla in few days

Shaak: Vegetable curries are called shaak and are prepared with variety of vegetables available in the region. Oondhiyu or Undhiyu is one of the most popular and loved shaak by the Gujaratis. It is a mixed vegetable curry that is traditionally cooked in earthen pot which is turned upside down on to the fire. “The name of this dish comes from the Gujarati words "matlu" meaning earthen pot and "undhu" meaning upside down since they have been traditionally cooked upside down underground in earthen pots fired from above.” (Wiki) This curry is made with vegetables available during the season including potato, sweet potato, brinjal~eggplant and yam, including broad beans ~ val and sruthi papdi ~ hyacinth bean . Beans are cooked until tender and rest of the vegetables are deep fried. All these veggies are cooked together with spices to make a delicious curry. It usually served with poori during weddings. It can be served for breakfast or for lunch. This curry is cooked for Makar Sankranti.

Farsan: is a side dish that compliments the meal and some farsan be served as it is as a light meal or a snack. Some of the farsan are bhajiya (fritters), chaat, dahi vada, dhokla, khandvi, handvo and kachori.

Most of the snacks called nasta are not deep fried and made with gram flour. Some the nastas are khakhra, mathia, sev and chakri. Daals are part of daily food. Sweets also know as mithai and some of the mithai from this state are malpua, jalebi, basundi, ghari, son papdi, guhghra, lapsi, shrikhand, shakkarpara.

Today I have one of popular and well known dishes from this cuisine, Khaman Dhokla. Dhokla is steamed cake with rice flour or lentils. When I was searching for dhokla recipes, I came across recipes that were made with rice flour, urad dal, moong dal, chana dal and gram flour. Dhokla made with gram flour or chana dal is khaman dhokla. Khaman dhokla made with chana dal needs to be ferment but the instant version is made using the flour using ENO fruit salt. I tried 2-3 recipes and liked this one better. It uses little bit of sooji and yogurt. 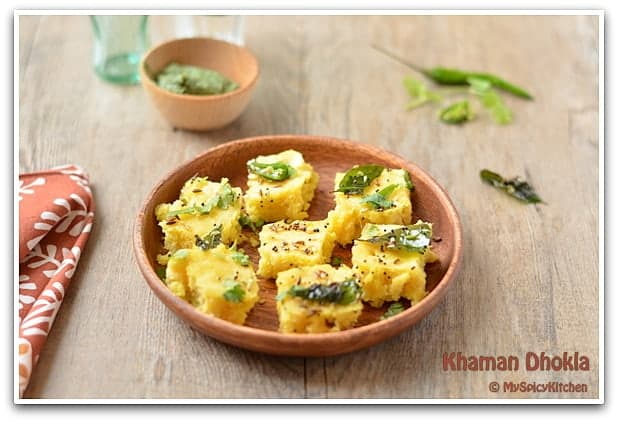