Khandvi is a very popular snack from the western state of Gujarat, India. It is prepared by rolling out cooked chickpea flour and yogurt mixture into swirls. My neighbors back home are from Gujarat and it was always on their party menus. Back then, I did not really care much for it and I barely remembered how it tasted, until I saw this post almost couple of years ago. I bookmarked the recipe and never ended up making it, just like the  most of the bookmarked recipes. A few months later, I discovered that the mithai (sweet) stores in Jackson Heights sell khandvi and I started buying it from them, whenever I craved for some. While I ate store bought khandvi, Mr.U enjoyed homemade khandvi his colleague gets to work. After tasting the homemade authentic khandvi, U doesn’t like the khandvi I get from the store. By now you must be wondering why I am telling you all this? Well, there is a reason for that. Thanks to Srivalli, I made khandvi couple of days ago.  U did not taste it and hence I can not compare my preparation to the  khandvi he relishes so much at work!  And more over, amongst the two of us, he is the only one who has had the luxury of tasting the homemade khandvi in recent times!  All I can tell you though is that mine was lot better than the store bought khandvi!

ICC for this month is, you guessed it right, Khandvi! I followed Lathaji’s recipe with a few changes. I made two batches. The first batch tasted similar to the store bought khandvi and I was not satisfied with it. The trick to this preparation is cooking the flour mixture to the right consistency. I felt the first batch was a little under cooked and tasted raw. So I made it gain! The second batch, I cooked it a little longer, an additional 30 – 60 seconds and it turned out yum. Although this preparation came out good, I do need to prepare it a few more times to master it. I made twice the given recipe, as I ended up making it twice. There are many khandvi preparation videos on youtube. I wish I had seen those videos before preparing it!   If you are making it for the first time, I would suggest you watch them before rushing off to your kitchen to make these delicacies! 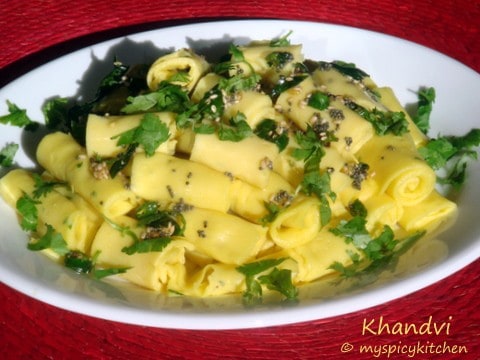 One quick announcement before I let you go. Srivalli and few other bloggers are on a one month blogging marathon. They started it on the beginning of the month are going to do it all thru this month, posting at least one post/recipe a day. I am joining them today onwards. You could say I am doing a half month marathon, 15 days only and lets see how long I can keep up with fellow marathoners.