For the month of June, Nupur picked some Arabic desserts for the home bakers challenge. I chose to bake Knafeh. Knafeh is also known as knafe, kunafeh, knafah, konafah, konafeh in various Arabic countries. It is a baked Arabic dessert made with sweetened ricotta cheese that has a thin noodles or vermicelli as a base. After baking the crusted ricotta, it is soaked in rose water flavored sugar syrup. The dessert was delicious! I took it to a party and everyone loved it. My pictures do not do justice to the dessert and the piece in picture is the last of the leftover dessert. When served hot or at room temperature, knafeh is soaked in sugar syrup. The piece in the picture was refrigerated for almost 3 days and the syrup solidified. I made the full recipe and it was lot for Knafeh. I used part skim ricotta and light cream instead of whole milk ricotta and heavy whipping cream. 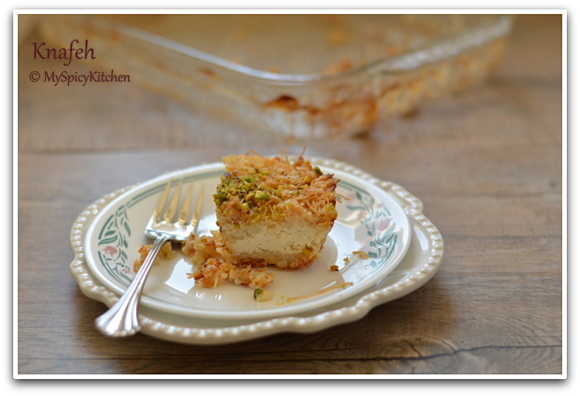 Note:
Recipe called for Kadiaf noodles which I believe are found in the freezer section of Middle Eastern stores. I checked Kalustyan’s, an eastern and Middle Eastern store that usually carries lot of spices and groceries from that region. They did not have it and hence used phyllo strips and some Bambino vermicelli (found in Indian stores). I spread the phyllo strips as the base and vermicelli on the top. I must say, I like the vermicelli better as they were crispy and crunchy. Phyllo strips became soft once butter was rubber into it. It did a make a nice base for the knafeh though.