As I mentioned in my yesterday's post, the theme for the last three days of this month is blogger’s choice and the initial suggestion by the group was travel theme. I went with the initial suggestion and picked the travel theme. Yesterday I posted a recipe inspired by something I ate during my travel and that is the only recipe post I am doing for this theme. Though I have chosen travel theme, my next two posts are not quite travelogues. I am going to write about the city I live in and give some suggestions and tips on what and how one can plan their day(s) in the city. I will focus more on sightseeing of the city. 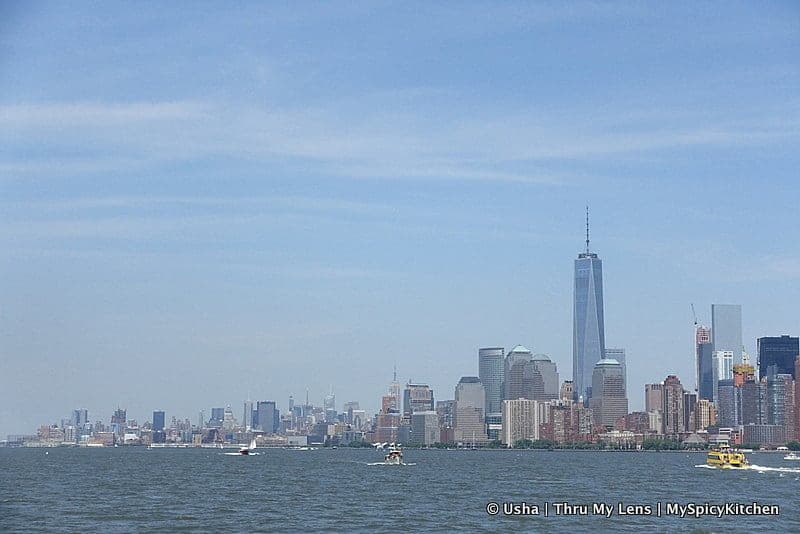 Yes, I am talking about the world financial capital of the world, New York, New York. Before I go further, let me just clarify couple of things. New York is a city in New York state and do not confuse New York City with New York state. Second, there is more to New York City than just Manhattan. New York City consists of 5 boroughs; Manahattan, Bronx, Queens, Brooklyn and Staten Island, though borough of Manhattan gets all the limelight. When I started drafting the posts for last two days, I was afraid I might not have enough matter to write and oh boy, was I wrong! Once I started writing, I realized I could easily do at least 3-4 posts on New York or even do a week of posts. 🙂 I will try to keep the posts short and will try not to make you fall asleep. The pictures I have posted here are from my photoblog and some of the pictures are as old as 4 years. I will try to update the post with recent pictures very soon.

People often ask if they can cover NY sightseeing in 1 day or 1 ½ days. I always reply, it depends on what all one wants to see and how one wants to spend the time in the city. If the purpose is sightseeing, it is possible to cover most of the major tourist attractions in a day but it is going to be very hectic. I usually tell people they need at least a day and half to cover most of the popular attractions & to have relaxed trip. If one is visiting the city for the first time, I always recommend taking a hop on hop off tour bus. This way, all the major attractions are covered and one can also get the feel of the city riding in the bus. Bus tour would cost at least $45 per person depending on the package plus entry tickets to various attractions. Check these sights and decide the best package that meets your requirement.
NYC Tour buses 1
NYC Tour buses 2

The other best option is taking the public transportation. All the major attractions are well connect with subway system. Check the MTA home page and the subway map for all the subways lines to get familiar. I tell you, it is best way to get around Manhattan on weekdays and it is relatively cheap. When planning the trip, allot at least half a day for Statue of Liberty and I suggest starting early as the first ferry leaving to liberty Island is at 8:30 am. If you start early you could finish your trip to statue of Liberty in 2 hours. I always went after 10 and it always took at least 2 ½ - 3 hours. It could take even longer during holiday season. The actual ferry ride to Liberty Island is only 10 minutes or 15 minutes max. It is the lines for security check and to get on the ferry that take up most of the time.

This past summer, my family visited the city and I took them around. This year I visited most of the tourist attractions twice, once with my cousin who visited in last week of May and with my father-in-law who visited us in June - July. Since he was here for 8 weeks, his sightseeing was relaxed, spaced out. We visited each place at our own pace. My cousin's visit was for three days and she was very particular that she does not want to stress herself out and wanted to see just 2-3 places and have a relaxed trip. Since she was firm on not visiting all the places and since she was here for three days, I took her to Empire State Building on the first day. She got into the city late afternoon. After lunch and a short nap, I took here to Empire State Building hoping to catch the sunset. We were a bit early and since it was Spring, sunset was very late. We did not wait for the sunset. From there I took her to Macy's as she wanted to do some shopping. Macy's is just a block away from Empire State Building.

Next day we left home after breakfast and reached Battery Park around 10 - 10:30 to goto Liberty Island to visit Lady Liberty. My cousin loved the statue and was impressed by her beauty! 🙂 She was glad I took her to Lady Liberty. She had asked me to pick the places to visit in the city and this was on the top of the list that I wanted her to see. There was a long line for the ferry back to New York and it was past 1pm when we got off the ferry from Liberty Island. We went back home and spent the rest of the day at home. The next day I took her on a hop on hop off city tour bus to see the city. She was not keen on seeing any other places as she had injured her leg prior to her US trip. I thought the bus tour would be a good idea to get the feel of the city and also to see other interesting place from the bus. That evening we went out for dinner and she flew to West Coast the next day. She was pleased with her NY trip.

Here is a list of few popular attractions
Lower Manhattan:
Statue of Liberty - Visiting statue of Liberty from battery park, New York takes at least 2 ½ to 3 hours. This includes the wait time for the ferry To and From Liberty island. On your way back to NY from Liberty Island, one can stop at Ellis Island though I have never gotten off the ferry to see Ellis Island. Ellis Island was port of entry for millions of immigrants coming to United States from 1892 to 1954. Now the island is a tourist attraction and has a museum of immigration. Ferry ticket to Liberty Island & Ellis Island includes access to Liberty Island and Ellis Island. You need not buy any tickets after getting off the ferry. However, if one wants to go on to the pedestal or the crown of the Statue of Liberty, please buy your tickets online and the tickets get sold out weeks and months in advance. Here is the link to all the information. This page has information about directions, bus & train information to get to Battery Park (that is where you catch the ferry to Liberty Island) and also ticket information.

Wall Street & the Bull - After a visit to Statue of Liberty, the Bull is couple of blocks away from Battery Park on Broadway. Few more blocks up north on Broadway is Wall Street. New York Stock Exchange is on Wall Street. It is not open for public but many people take pictures in front of the exchange.

Brooklyn Bridge - Brooklyn bridge is about 10 minutes walk from One World Trade Center.

China Town - Is few blocks away from City Hall / Brooklyn Bridge. It is walking distance but if tired, just hop on a train and get off on Canal Street. There are a few stores on Canal Street that sell fake designer bags for bargain prices. The quality is not very good but many people buy from here. Some bags look genuine but do not last long. Few years ago street vendors use to sell the bags openly but now the city has taken measures to curb selling of imitation luxury goods. There are some vendors who still sell the bags and sometimes they whispering in ears if you want a designer bag. It sounds and is creepy. Some of them have their merchandise in creepy areas. If following the vendor for some bags, please do not go allow. Some of their stores are tiny and like dungeon. I do not fancy those fake designer bags and I rather buy 1 good genuine bag than purchasing 3-4 fake ones.

Midtown Manhattan
This covers most of the major tourist spots in lower Manhattan. The next most visited attraction apart from Liberty Statue is Empire State Building in Midtown. Rest of the tourist attractions in midtown area are in 15 - 20 block radius.

Macy's - is on 34th Street and 6th Avenue, a block away from Empire State Building and was the world’s largest department store until 2009, larger than Harrods in London. Many tourist visit the store. Nearest train station is Herald Square and Penn Station.

Rockefeller Center
Rockefeller center spans 48th to 51th street between 6th & 5th avenue. It is home to NBC studio, Top of the Rock observatory center & it is an annual tradition to place a large Christmas tree at the center. In winters, lower level of the Rockefeller Plaza is open for ice skating.

5th Avenue Shopping - Right across the street on 5th avenue from Rockefeller Plaza is Saks. 5th Avenue from 48 street and going up has high end to low brand stores. Channel, Prada, Armani, Fendi, Gap, H&M are a few store on 5th Avenue. Apple Flagship store is on 59th street and 5th Avenue.

Central Park - Central park spans from 59th street to 110th street between 5th avenue & Central Park West (8th Avenue). There are many activities to do in the park and this is my favorite place in the city. Once I enter the park, I feel very close to the nature and forget all the hustle and bustle of the city. There is a Zoo on 64th street & 5th avenue, Wollman rink on the south end of the park, which is a skating rink in Fall & Winters and has rides for young children in summers.

There are buggy rides at the south end of the park on 59th street that takes tourists into the park. In summers there is summer stage where artists perform. Check Central Park Activities for more information.

Museums:
MET (Metropolitan Museum of Art) is on 5th avenue between 80th & 85th streets
Guggenheim Museum is on 5th Avenue between 88 and 89th streets
Natural History Museum is on Central Park West between 77th & 81st streets
MoMa (Museum of Modern Art) is on 53rd Street between 5th & 6th avenues. This is close to Rockefeller center.
Met and Guggenheim are on the Eastside of Central Park and Natural History Museum is on the west side of the park.

Well, this post has already become very long and I feel I have missed mentioning a lot more information. As I said, one day in the city is going to be very hectic. All the places I listed are not must visit places and might not interest everyone. Plan your trip according to your interest and have a fun time.

After so much walking and sightseeing, you must be exhaust. I will come back tomorrow with a lighter schedule and some food.