There is no country starting with alphabet W. We decided to do a city or a region starting with this alphabet but only catch is we cannot repeat that country for the alphabet it starts with. Had I done C for China, I could not have done Wuhan, China for W. So for W it is Wuhan. Wuhan is the capital of Hubei Province, China and is the most populous city in Central China. It is a major transportation hub with dozens of railways, roads and expressways passing through the city. Since it is a major hub, Wuhan is often referred as “Chicago of China”. Wuhan is a cultural, economic, financial, political and transportation center of China. One of the popular dishes from this city is Re-Gan Mian or hot & dry noodles. I came to know about these noodles when I was searching for breakfast ideas for the June marathon. I wanted to do this for breakfast then itself but saved it for my W. Hot and dry noodles are a popular breakfast in Wuhan and are sold in street carts from 5 am to midnight. “Re” means hot and “Gan” means dry. These noodles are first cooked and let to dry. Before serving, the noodles are dipped in hot water to warm the noodles and then served with a sauce. This is a quick and easy recipe though the recipe has a long ingredient list and procedure looks lengthy. If you are making a vegetarian version, noodles can be put together in less than 30 minutes. We usually like stir fried noodles and this was different to what we are used to. I would not say we loved it but the noodles were flavorful soaked in the sauce. I would not mind making this again when I need to fix a meal for just myself, as it so easy to put together. 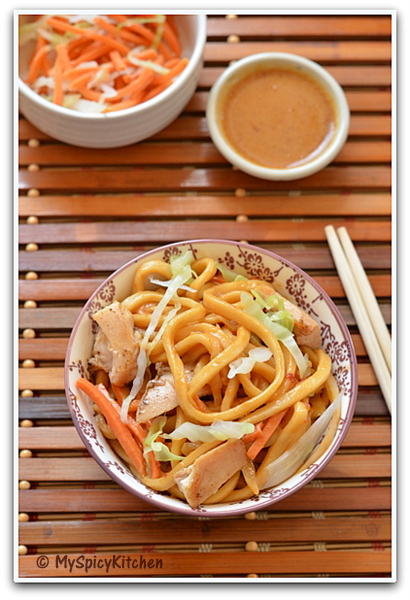