When the theme for this BM was finalized, I made a list of recipes I want to bake and also made a list of cakes & muffins I could bake in India during my stay there. My older nephew like any child of his age loves cakes and muffins. The plan was to bake at least 5-8 bakes when I was there. However, I could not bake much. I could not figure out my mom's oven settings. I baked 3-4 times and gave up. Bakes were not perfect but my nephews loved the bakes, including the toddler. I baked all those goodies in my oven after coming back. Back in India, one day my sister-in-law was going to discard 3-4 almost ripe bananas as there were no takers. I asked her to hold on to the bananas for a day or two until very ripe and the bake this banana nut bread. Recipe called for baking at 350 for 50-60 minutes and our bread was done in 15 - 20 minutes, despite baking it at 300 – 325F. The taste was good and everyone finished it off but it was a little dry. By then I had already baked 2-3 recipes and gave up. Since my nephews liked the bread, my sister-in-law baked this bread again & second time it came out perfect. This was just before I was returning and I could not take any pictures. My older nephew and I finished off the bread in less than a day & that bread was 3 times the recipe given below. After coming back I baked the bread, not once but numerous times and the number of pictures in various settings is the evidence of that. 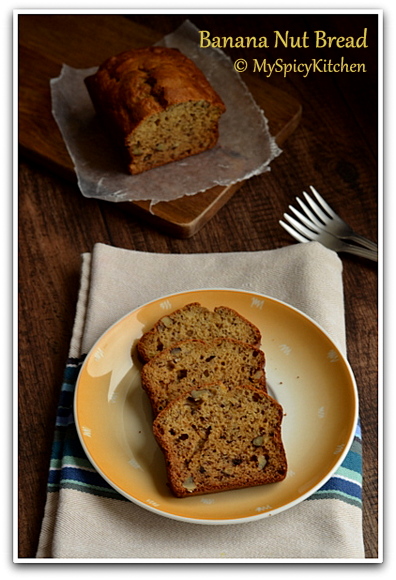 I am one of those few people who dislikes banana. I don't like banana and do not like to touch or taste it. Growing up I was not this pick and did not mind few pieces in fruit salads and desserts but over the years I got very picky. I just could not stand it. My cousin gave this recipe 5 years ago and I just could not get myself to bake it until recently. Actually, I am gradually befriending bananas, especially since last April after trying sel roti. Now I am ok with bananas in bakes and have one more banana bake coming up next week. 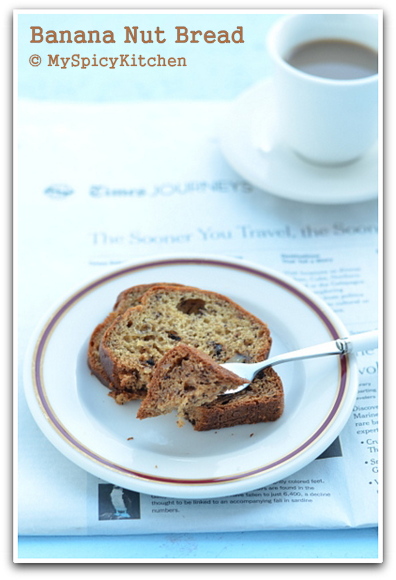 Today's bake is an easy one. The recipe actually calls for mixing up all the ingredients together and bake. But I made it a little complicated by mixing / beating one ingredient at a time. The first time I made this bread here; I made it with 3 bananas and baked it in an 8 ½” square pan. I added too many nuts and I was not very happy with it. 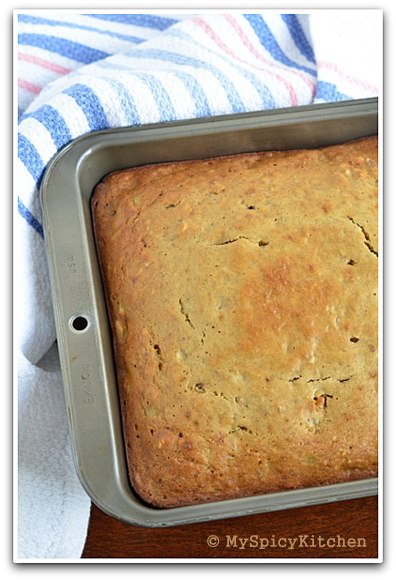 Few days later there was this ripe banana staring at me. I took pity on it and made a mini loaf by scaling down the original by ⅓rd. This time I used few nuts and the bread was great. The loaf was also the perfect size for two of us that finishing it off was not an issue at all. Actually the mini loaf was the perfect size for me to finish it off in less than a day. The bread is not very sweet and it is better less. How can one resist such a guilt free bake! 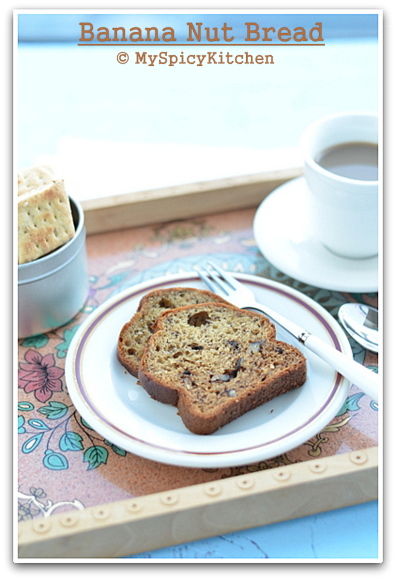 This day in 2012 - Chicken Feast Announcement and Badami Murgh ~ Almond Chicken
This day in 2014: Ngaa Atoiba ~ Fis Stew from Manipur

Events: This goes to this week's Cooking from Cookbook Challenge and to Anniversary Meal hosted by Srivalli. And do not forget to check out the Blogging Marathon page for the other Blogging Marathoners doing BM# 51 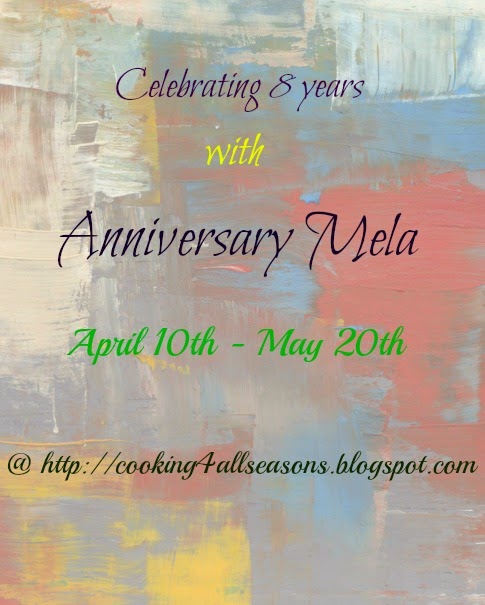