Capsicum paneer rice is Indian style fried rice with paneer and bell peppers. It is a filling meal with some raita on the side. Great for lunch boxes and to use up leftover rice.

After posting one biryani & one pulao recipe, for the last day of the marathon it is a rice dish that falls under the other rice varieties category. Here, rice is fully cooked, seasoned and/or tempered with spices to enhance the flavor. Capsicum paneer fried rice Indian style is one such flavorful rice variety.

Plan was to prepare tawa style pulao. Tawa pulao is a popular street food from Mumbai. It is prepared sautéing vegetables and rice in a frying pan with pav bhaji masala.

Tawa is griddle or a frying pan and pav bhaji is another popular street food from Mumbai. When I realized I was out of pav bhaji masala. Hence decided to make a simple Indian style fried rice that I usually make, with addition of some paneer and bell pepper cubes.

Tempering is called poni or popu or talimpu in Telugu and annam is rice. Poni or popu annam is something I make very often with left over rice or when I am out of vegetables and no leftover curries. Addition of omelet pieces makes it a one filling and comforting one pan meal.

Bell pepper paneer fried rice is similar to poni annam but with addition of tomato as well for added flavor. Store bought fried paneer comes in very handy in this preparation and eliminates an additional step of frying the paneer separately. These fried paneer cubes are very convenient when making paneer curries and rice. 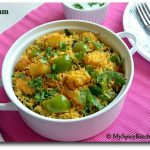