After a day’s rest we are back to our baking marathon. This week my theme is savory bakes. For the first bake in this series are popovers. Popovers are light; hallow bakes made with egg batter. I baked my first popovers, rosemary popovers last fall for one of the baking groups. One of my group members made chili cilantro popovers and I wanted to try that flavor right away. I made them twice with chili cilantro mint before but could not take pictures. I made them again last month just for the sake of pictures. In fact these were my husband’s lunch when I went for the Vegan food festival with Mir & Pavani. The recipe is similar to rosemary popovers; the only difference is I substituted rosemary with chili cilantro and mint. I particularly like this popover recipes as the popovers are hard on the outside and do not deflate immediately like the other popover recipe I tried for the bakeathon.

Photography Corner: The setup I used for these pictures is the same as the one I used for Chocolate Chunk Blondies. 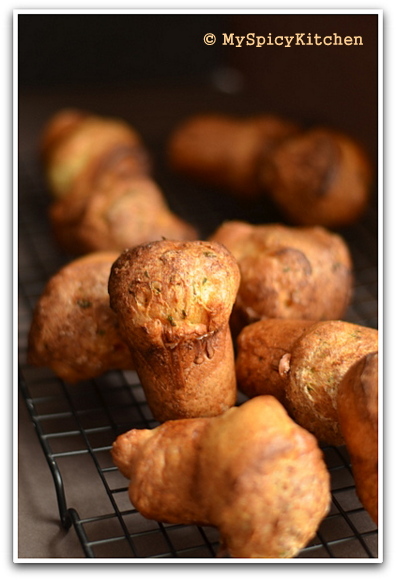