I made half the recipe and it turned out good. Cooking time was a bit off, it took longer to bake than mentioned in the recipe. I baked it on low heat but have a feeling cooking it on medium-low would have been the right heat to cook this cake. When baking in a pressure, the points to remember are not to use a gasket and not to use the whistle. Since the cooker would be used without any water, the whistle should not be use. This is very important. The cooker could explode, if cooked without water and with whistle. So please do not use the whistle when cooking a cake in a pressure cooker. Also, I was bit scared baking the cake fearing that cooker might explode. I sat in the kitchen while the cake cooked/baked. Nothing of that sort happened but please be cautious though. Nags has a separate post on how to make a cake in a pressure cooker. This day in 2009 - Vegetable Dum Biryani
Recipes I posted this month in 2009 and in 2010 .
Blogging Marathon: To know more about the various themes and participating bloggers for this marathon, checkout the blogging marathon page
Events: This cake is on it's way to Cake Mela 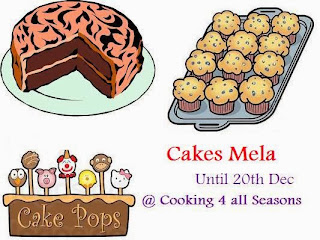