Today was a disastrous day in the kitchen. I had planned on making chocolate pizza for day 4 of the marathon. I bought pizza dough yesterday and I was all set to bake this afternoon. I made myself a veggie pizza for lunch with half of the dough and for my dessert, I planned chocolate pizza. Then a brilliant idea struck me. I thought I would make floral or round mini pizzas; cut them into mini floral or round bases and wouldn’t those be cute little bites? I pre-heated the oven, greased the pan, rolled the dough and pulled out the cookie cutters to cut the dough into bite size bases. As I cut the rolled dough into bite size pizzas and tried to place them on the pan, the shrunk (dough came together) and I had to re-shape them. They did not look pretty at all.. 🙁 I abandoned the mini pizzas idea and rolled the dough again. That is when the problem started. Since I used little flour to roll out the dough first time around, the dough was no longer loose and rubbery/spongy any more. I managed to make a rectangular base and baked the pizza base. It just did not look good and it went straight into the trash can. 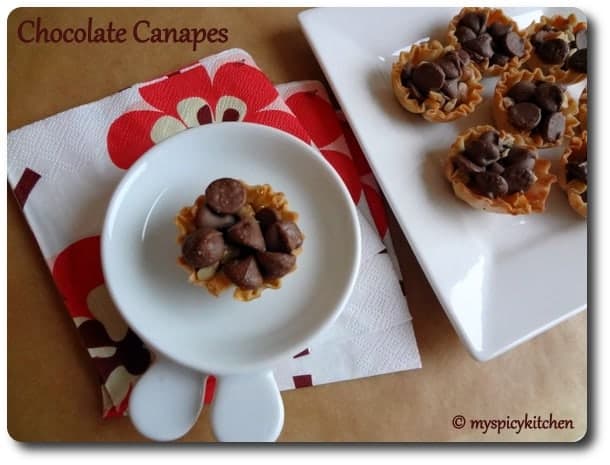 I quickly thought of plan B, to make either chocolate pizza tart with pastry sheets or chocolate puffs. I decided to bake the latter. I thawed the sheets as per the instructions, preheated the oven, made the filling and started to work on the puff sheets. The sheet did look right, the color was a little different and it smelled a little weird. The sell by date was till March but for some reason, I could bake those sheets and those went straight into trash.

It was past 3 pm and I did not have a recipe to post for the today! 🙁 As I was frantically looking into fridge, pantry and the freezer, I spotted my favorite mini phyllo shells in the freezer. I had other plans for these shells but it came to my rescue today in the form of chocolate canapés. These little bites are perfect for late night chocolate craving or for a quick dessert for a chocoholic. Chocolate and walnuts are baked for 8-10 minutes in the phyllo shells just until chocolate begins to melt and walnuts are lightly toasted. Those were very addictive, without even realizing, I finished off 6 shells clicking the pictures. And I did not even take that many pictures today, no natural light as it was cloudy most of the day and started raining by the time I was ready to take some pictures. 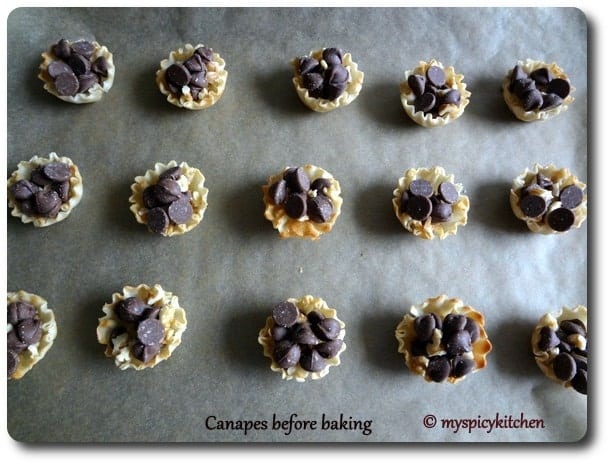