I made some tomato soup to go with the tomato basil loaf I made for the tame the yeast theme. I followed Food Network’s Michael Chiarello's recipe. The recipe also had a video of the soup preparation but I ignored the video and just followed the written recipe. The written recipe asked to puree the soup mixture until smooth and I was not really happy with it. I prefer lighter soups to thick ones and this soup was very thick. The soup was so thick that Mr.U thought it was some sauce to go with the bread. It paired well with the bread though and decided to go with the recipe. The original recipe is very rich with ¾ cups of extra virgin olive oil, 2 tablespoons of butter and ½ cup of cream. The cream is optional though. I could not get myself to use so much fat/grease and cut back both on the oil and butter. It still was a little heavy. If one wishes they can cut down the fat further and cook a little longer until the vegetables are tender. 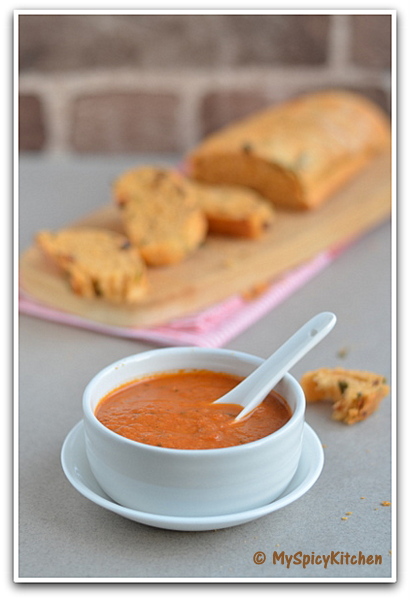 Since I was disappointed with the texture of the soup, I saw the video and in it the chef specifically says not to puree the soup until smooth and to keep some chunks of veggies in it. On Sunday I ate lot of junk and wanted something light for dinner. I had some carrots and celery in the fridge made this soup again. This time I kept chunks of veggies and soup was not very thick. I loved the semi thick soup with bites of veggies in it. Since the texture is so different from the first time I made it, I took the below picture. Yesterday it was rainy and gloomy all day with very little nature light. Lately, I am trying to taking some moody shots and yesterday's setting was perfect to try a moody shoot. I was going to post this recipe tomorrow but I was so anxious to get some feedback on this picture, so posting it today itself 🙂 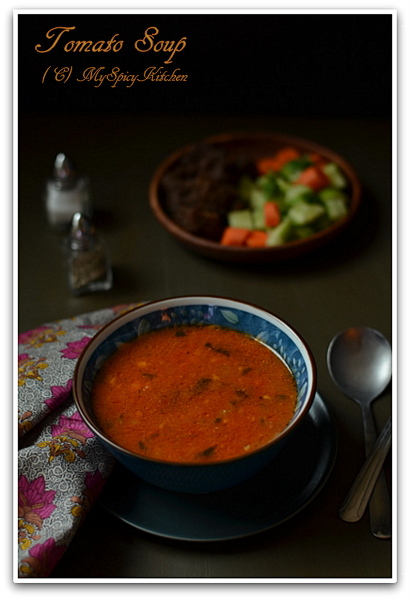 Blogging Marathon: To know more about the various themes and participating bloggers for this marathon, checkout the blogging marathon page