Anzac biscuits are very popular in Australia and New Zealand. These biscuits have a history and it is always interesting to know how the food got a name and the history behind it. During World War 1, soldiers wives made these biscuits and sent them to their husbands stationed abroad. Australia New Zealand army corp (ANZAC) was formed during World War 1 and hence these biscuits have always been associated with ANZAC. These biscuits are made during ANZAC day as a fundraising food due to its association with the military. Anzac day is a day dedicated to remember all Australians & New Zealanders who served and died in all the wars and peace keeping missions. Anzac cookies are sweet biscuits prepared with rolled oats, flour, coconut, golden syrup and hot water. Ingredients used in these cookies have a long shelf life and hence were good to send abroad during the war. Also, these biscuits do not have eggs as there was a shortage of eggs during World War 1 as most of the poultry farmers went off to war and there weren’t many farmers around to take care of the poultry farms. Also, omitting eggs give these biscuits a long shelf life. I had initially put these cookies down for Australia and hokey pokey ice cream for New Zealand. Then I found another recipe for A and saved these cookies for a baking event. My plan was to make hokey pokey ice cream when my niece visited us in June but that did not quite work out as her trip was cut short. Kokey pokey ice cream, the name is so cool, right? More than for the flavor of the ice-cream, I wanted to make it as it had a cool name! 😉 Since I did not want to make desserts for this theme, I settled for Anzac biscuits/cookies which are much healthier than the ice-cream. I know, I know, even these biscuits have sugar but it is ok to break the rules once in a while, that too when the rule is self imposed.. 🙂 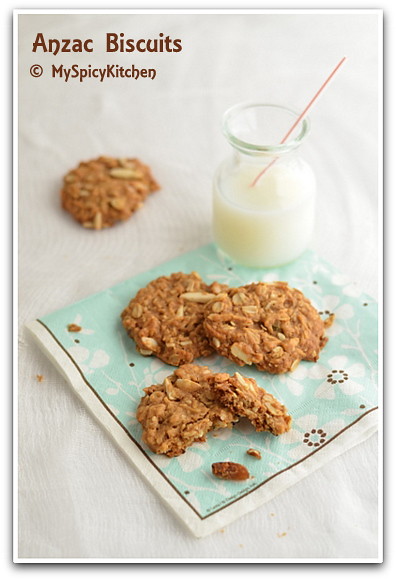 I made half the recipe as Mr.U was not interested in eating sugar. However, one day he wanted to eat some sweet and chose these biscuits over bourbon biscuits. Initially he was reluctant to taste but when I told him the ingredients that went into it, he did not mind eating one. The first picture on white background was taken the same day I baked the biscuits. The other two, the one with blue napkin and yellow napkin were taken one or two days later. I took those pictures for the 30 days to better pictures that I signed up for last month. It was interesting to see the varied views I got for these two pictures. Of all the members who left a comment, they were split in half. Half of them liked the blue napkin and the other half liked the yellow napkin picture. 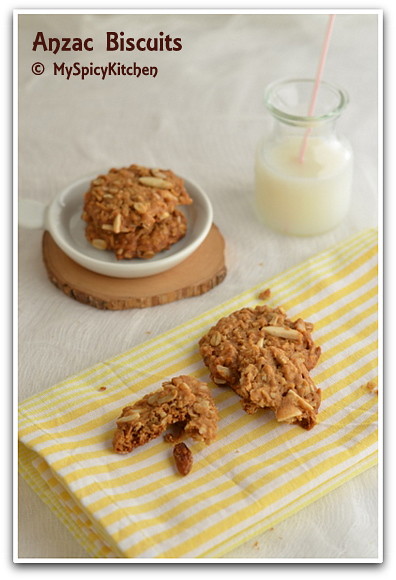 Events - This goes to Bake Fest # 35 hosted by Nalini, an event start by Vardhini.