Today we are traveling to the Korean peninsula to taste some Korean cuisine. Korea is an East Asian territory that was divided into two sovereign states; North Korea and South Korea. This is one cuisine I decided I was going to do the moment the theme for this marathon was finalized and even before I confirmed my participation in this marathon. The fact I over looked was which Korea I was going to do; North or the South and for which alphabet, ‘N’ or ‘S’. The cuisine of both the countries are referred to as Korean cuisine that I completely over looked the country and listed Korea for K in my spreadsheet that I created to keep track of my marathon progress. Also, even the Korean bloggers refer to their cuisine as Korean and do not differentiate between South Korean and North Korean cuisine. I eventually decided I would stick to Korea for alphabet K, as I had initially planned. 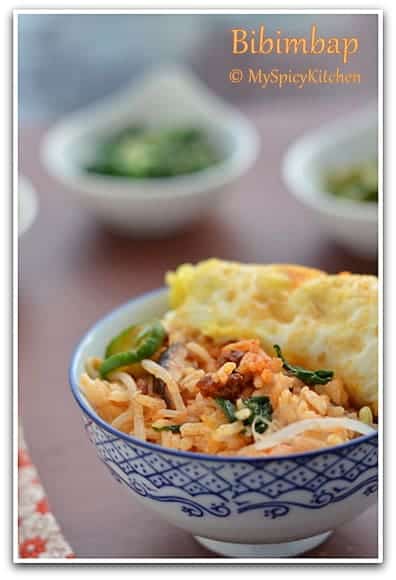 Korean food is rice based with lots of vegetables and meats. Korean meal has many side dishes known as banchan. These side dishes are either steamed, blanched or fermented vegetables. Kimchi is one of the most known side dishes of this cuisine which is fermented cabbage. Kimchi is also prepared with Korean radish and cucumbers though cabbage is more popular. Kimchi is national dish of Korea. Another signature dish of Korea is bibimbap, which is mixed rice served with assorted vegetables and meat. There are many variations in bibimbap depending on how it is served. Dolsot bibimbap is one variation where it is served in stone bowl. Sesame oil is applied to the bottom of the bowl, heated and then rice is served in it. The bowl is usually so hot that the bottom layer of the rice becomes brown and crisp. The bowl is so hot that the food sizzles for some time. Sesame oil, sesame seeds, soya sauce, gochujang are some common ingredients in the cuisine. 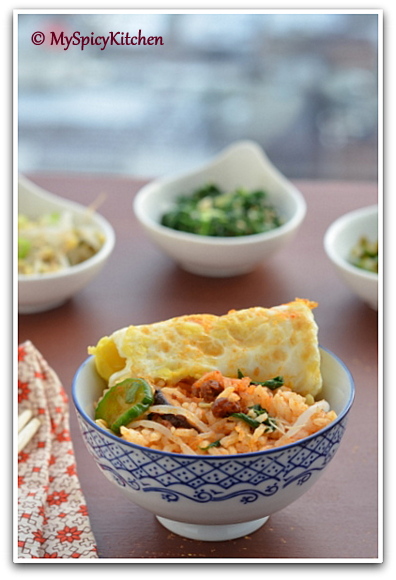 Korean cuisine is one of our favorite cuisines and I wanted to cook something for this marathon. There is a Korean barbecue restaurant Don’s Bogam near Korea Town that we visit regularly. Our order there is always fixed; japchae (sautéed glass noodles), shumai (steamed shrimp dumplings) and fried mandu (pork dumplings) for appetizers, spicy short ribs and couple of pork dishes for main course that are grilled in front of us and dolsot bibimbap. We do not order all these but depending on how many of us go and how hungry we are, we order some of these. I normally do not prefer beef but at this place, I go there only for beef spicy short ribs. Below is the collage of some of the pictures I took when we dined there and few more on my photo blog. 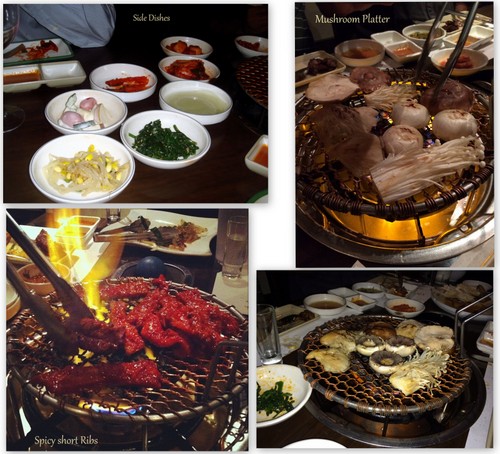 When it came to cooking for this country, I was going back and forth with spicy short ribs and bibimbap. I do not cook beef at home and decided to do minced pork bibimbap. I made bibimbap few years ago and do not even remember which recipe I followed. I used chili paste and the taste was average and was not close to bibimbap we eat at Don’s Bogam. The key to a good bibimbap is gochujang, a Korean chili paste. This time I wanted to keep the recipe as original as possible and bought gochujang and I am glad I did. Bibimbap turned out pretty good and I made it again upon U’s request. He did not comment much on the taste but he said despite eating 2 servings, he felt light. He wants me to make it once in a while. For this dish, I made seasoned spinach and bean sprouts to add to the rice but these also be served as side dishes. Links to these two side dishes are in the ingredients list. I also made spicy cucumber salad and served it as a side dish. If one wishes to add it to bibimbap, make it less spicy. 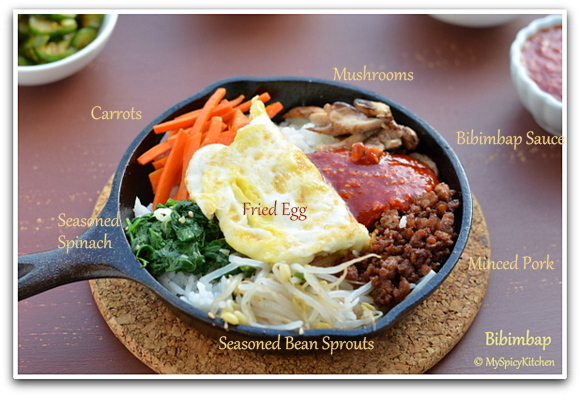