Shrimp biryani an aromatic shrimp rice preparation where marinated shrimp and partly cooked rice are arranged in layers and cooked on a low flame to perfection. A must try entree for special occasions and weekend meals.

Fragrant basmati rice cooked with marinated protein of choice on low flame, in an air tight container is one of the must try dishes. Preparation varies depends on the region and one of the popular ones is Hyderabad biryani.

There are two styles of cooking; kacchi biryani and pakki biryani. Key difference between the two is, in former raw protein and in latter precooked protein is arranged in layers along with rice and then cooked in dum style. Here is my pakki shrimp dum biryani recipe.

Born and raised in Hyderabad, I cook Hyderabad style biryani. Biryani with some raita or salan is a hearty, satiating meal.

Biryani Masala or Garam Masala - My list for the masala is basic and simple. Cardamoms, cloves, cinnamon stick and shah jeera (caraway seeds). Sometimes I use peppercorns and when I do, I cut back on green chilies from the below list.

Rest of the ingredients - Onion for frying onion slices and saffron infused milk when layering biryani.

There are three components to preparation of biryani. Marinate the protein, partly cook rice, arranging protein & rice in layers and cooking in dum style.

Grind garam masala powder. Chop coriander and mint leaves. Clean shrimp, squeeze out as much water as you can and marinate with marination ingredients. Marinate for half - one hour. Image #1 in below collage.

Rest of the preparation

Wash rice and soak in water for at least 30 minutes. Slice onions, fry in oil until golden brown (image #2 in above collage) and keep aside. In bowl take saffron, milk and microwave for minute and keep aside (image #3).

Once water boils, add all the ingredients listed under cooking rice, soaked rice and bring to a one good boil. this takes about 3 minutes on my stovetop (image #4). Reserve about a cup of water and drain rice to a colander.

You can cook on stovetop in a wide saucepan or a saute pan and that's what I used for step by step pictures. This how I do these days. Before I perfected cooking biyani on stovetop, I use to cook in rice cooker. I shall give those instructions as well.

Spread half the oil in a saute pan or rice cooker. Arrange shrimp at the bottom of the pan. Spread half the rice over shrimp, half fried onion and half saffron milk. Repeat this step again with remaining rice, onion and milk. Lastly pour reserved water from cooking rice.

Stovetop - Place 2 sheets aluminum foil on the pan which should be wider than the diameter of the pan, and then cover the pan with the lid. Fold the extra foil around the pan such that it seals the pan and the lid. Use narrow sheets of foil  foil to seal around the pan.

Place heavy object on the lid. I place a wok upside down and on it, cast iron pans. You can use your weight lifting dumbbells or a heavy mortar pestle. Cook on high flame for 10 minutes, lower the flame and cook for another 20 minutes on low. Let sit for at least half hour before serving.

Rice Cooker - Arrange shrimp and rice in the inner pot. Cover thee pot with the lid and put some heavy object to lock the pressure inside. Turn on the cooker. Once it shuts off, rest for at least 30 minutes before serving.

Serve Hyderabad prawn biryani with raita or salan. My favorite is with salan or without any side dish. My husband likes as is or with salan, chicken shorva or mutton shorva.

Can I use frozen shrimp for biryani?

Yes you can. In fact, here in US, I always end up using frozen shrimp. When using frozen peeled shrimp, thaw shrimp completely before marinating.

How to fix overcooked or under cooked rice?

Texture of the biryani depends on how long you precooked the rice. If you feel rice is overcooked, cut back on the liquids (saffron milk+reserved water). When rice is undercooked, add more liquids. 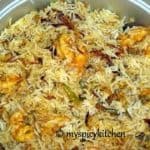