Orange Cinnamon Creme Brulee is a rich orange cinnamon flavored custard, with a layer of hard caramel. It is a gluten free dessert.

Creme brulee is a rich custard with a thick, crisp and a hard layer of caramel or burnt sugar. Brulee means burnt, hence creme brulee is often known as burnt creme. You usually bake it in ramekins or in gratin dish.

The basic ingredients for creme brulee are heavy cream, vanilla bean, egg yolks and sugar. As with any dessert, modify the basic recipe for different flavors and today’s recipe has an orange cinnamon flavor. Bake creme brulee in an oven, in a water bath and refrigerate to set completely. Just before serving, caramelize the top with sugar using a torch or in an oven broiler.

Today’s recipe is from Delicious Desserts. I followed the recipe to T but for one substitution, heavy cream with whole milk. Also divided sugar into half for custard and caramel. 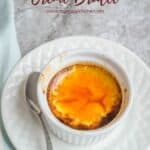