Sev is a popular deep fried snack with a shelf life of at least a week and even longer. Gram flour is the key ingredient and othere ingredients vary depending on the recipe. Kara sev is a common South Indian version and aloo bhujia or aloo sev is very popular in the North.

Ratlami sev is a specialty from a town Ratlam in Madhya Pradesh India. The uniqueness of the sev is the addition of a special spicy spice blend. When I saw the recipe, spicy food lover in me was instantly tempted to make it at home.

Vaishali, Srivalli and many of the bloggers followed a similar recipe unlike Suma. The main difference in the two recipes is the spice blend and other significant difference is the additional step of preparing a seasoned frothy liquid mixture to prepare the batter.

Suma’s recipe, which I shall refer to as recipe 2 here on, has few spices unlike the other recipe that has a long list of spices, some of which I do not use in my cooking, although I have them in my pantry.

The other significant difference in the recipes is this seasoned liquid mixture with. First recipe calls for beating together water and oil until white and frothy, and seasoning it with lime juice, spice blend and soda. According to this recipe, using this liquid mixture gives the sev a nice texture and crunch.

Recipe 2 is straight forward like any other sev preparation, mix spice blend and baking soda in flour, prepare the batter using water and oil.

Since Suma’s recipe (recipe 2) is straight forward with fewer spices, the plan was to follow her recipe. However, on the day of the preparation, I came up with a spice blend picking all the spices that I like from both the recipes. When preparing the batter I realized recipe 1 which uses this frothy liquid mixture calls for less soda/baking soda than recipe 2.

Therefore, followed recipe 1 of mixing together the liquids, spice blend and then preparing the batter. Both the recipes are give the same result and taste hence went with the recipe that works best for me.

Sev came out crunchy and super tasty. The spice doesn’t hit you right way but can feel the spice after eating the sev and also the taste of asafoetida. We relished the sev and is a keeper recipe. 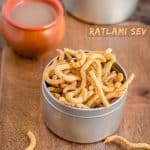