For the last day of this week’s marathon I have a baked potato recipe. This is another easy recipe I found on Taste of Home. There are so many wonderful recipes to choose from top 100 recipes, it was difficult to decide what to cook. I have bookmarked lot of recipes but had to eliminate some as those were either desserts or very rich in calories. I baked this potato on Wednesday and since this is a very easy recipe, I even considered cooking something else. Since I already bought the potatoes, I went ahead and baked it. The plan was to bake two potatoes, one for me and one for husband. He already complained that I made potatoes twice in the last 3 days and did not want anymore potatoes. Hence baked just one potato for myself. Photography Corner – The day I baked these potatoes, it was gloomy and rained all day. Since it was gloomy and there was not sufficient natural light, I thought of doing a moody shoot. In the past I would have never consider taking food pictures on cloudy & rainy days but not anymore. Though I prefer pictures taken on sunny days, I have learnt to utilize the little natural light available on gloomy days to take decent enough pictures for the blog. I was happy the way these pictures came out and thought of sharing how I took these pictures. Before I go further, I am no expert in food photography or photography. I am still learning photography.

Since I was planning on doing a moody shoot, I chose dark background, dark backdrop and a dark colored printed napkin. As for styling, I wanted to do simple styling and used the same baking sheet in which I baked the potatoes. I started off with the potatoes on the baking sheet and I felt the sheet was empty. I needed more props or elements in the frame. I decided to place a bowl of chili powder and salt. When I checked my props, the the bowl in the images is the smallest bowl I have and the other bowls I considered were wooden bowls. Since I had only one bowl of that size, I used same bowl for both salt and chili powder. Once I placed the bowl, I still felt the frame was empty. I placed two springs of cilantro in the back to fill the frame. I still felt the image had lot of negative (empty) space behind the baking sheet. So I placed couple of solid napkins; brown and green, though those napkins are barely visible in the images I picked to use for this post. 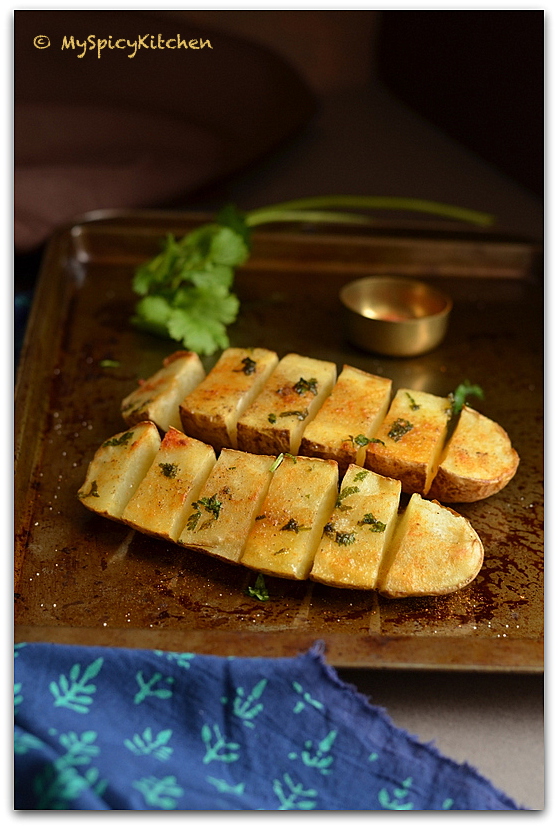 I setup my shoot near a window. Source of light was from the right and I used a black board as a bouncer on the left. I also used a black foam board as a blocker on the right, blocking some of the light coming from the right in such a way that half the baking sheet is blocked and the light falls only on the potatoes. If you observe the first two photos, the area between the backdrop and the tray is dark.

I usually take 4 -5 shots from one angle with different settings. Sometimes the images that look decent in camera end up looking over or under exposed on the laptop. Similarly, though I shot dark images, once I downloaded the images I liked the images with more light. So I do not know if I can still call these moody images. I hope this photography corner is helpful to some of you and I by no means am an expert in photography. I actually wanted to do a separate post for photography corner as it had enough matter to have a post of it’s own. Since I already shared similar setup images in the past here and here (this post has behind the scene shot), I did it here itself. From next time I will do separate posts for photography. 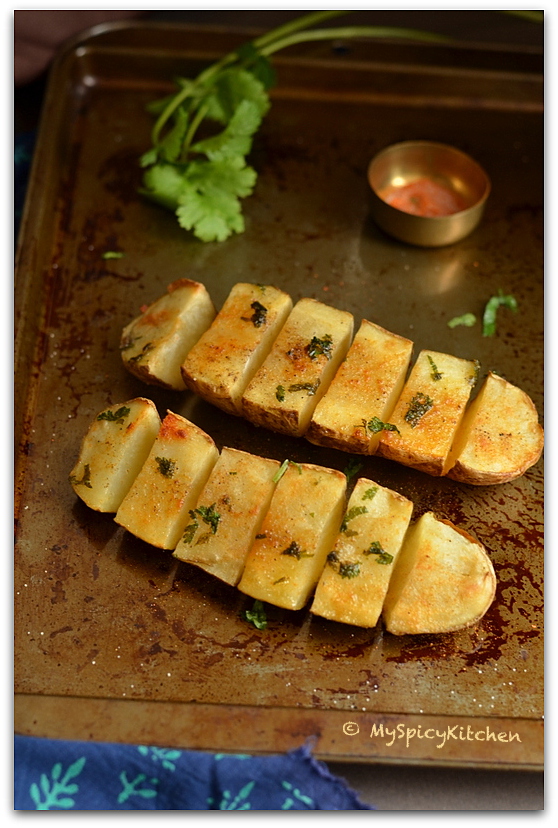 This day in 2014: Roasted Onion Paste for Curries