For the last & 6th day of Indian states for Buffet on Table, I have a simple everyday meal from my home state of Telangana. Past few days leading up to the marathon, there was lot of chatter on Whatsapp by fellow marathoners about the thalis each one was preparation for Indian states. To keep up with them, I decided to make a spread of everyday food and to imitate their thalis. My spread today is not a festive food and by no means I cook so many curries everyday. I wanted to do a simple three curry meal & that ended being so elaborate. I also wanted to stick to traditional and rustic way of cooking as it was done years and years ago in grandmoms kitchens. I usually cook two curries; one dry and one gravy, and of which one is a non-veg dish. When I have guests at home, the size of the menu increases to at least 3-4 curries depending on number of guests. For this meal I wanted to put together a simple & easy meal that includes everyday food. 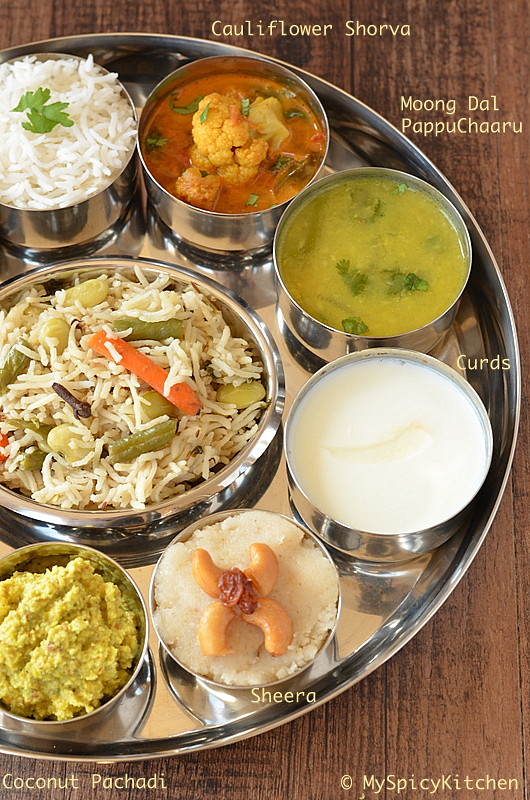 Btw, special thanks to Rajani for getting the plate and 5 bowls all the way from India. One of the other reasons to do this spread is to use the thali (plate) & katoras (bowls) she got us, hoping we would do thali for Indian States. 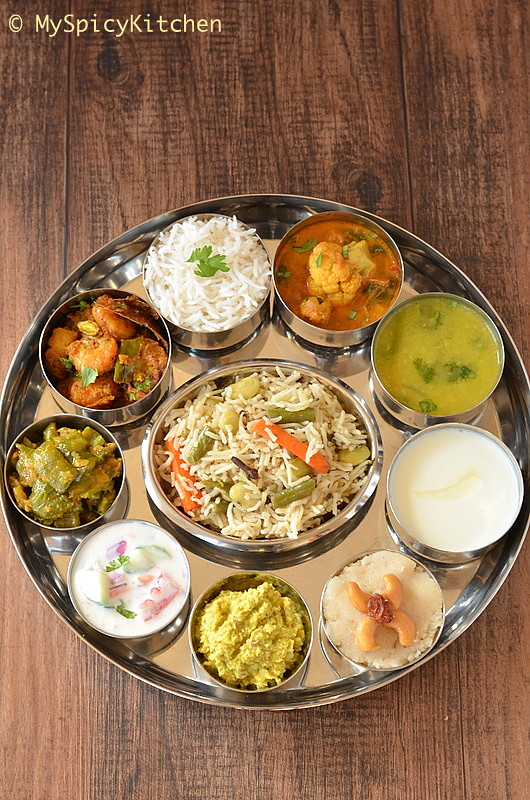 This is how I finalized the menu:
Since pappu charu is a staple in Telugu households, just like sambar in other South Indian states, pappu charu was a must on the menu. I have already posted pappu charu & nimmakaya pappu charu (pappu khut) hence opted for mamidikaya pappu charu. When I did my groceries, I could not find raw green mangoes & decided to do pesaru pappu charu without lime juice. Chikkudukaya was the stir fry I wanted to cook as it is one of the favorite vegetables and loved by everyone both at my parents & at my in-laws place. Since I already have it on the blog, I went for simple beerakaya koora. It cooks fast and does not require too much of prep work either. Next on the menu was a non veg curry. A non veg curry is a must in my house, if not meat at least eggs. Shrimp is one of the easiest non-veg curries to cook. I already have two versions here & here but I was ok with it as I would be cooking one less recipe for the blog and do not have to worry about measuring the ingredients and cooking timings. I made the no tomato curry as that is how it used to be cooked years & years ago when we were growing up. I thought my second shrimp curry on the blog was no tomato curry and just before I cooked I noticed both the recipes I have here are with tomatoes. 🙁 Well, now I have another recipe for my drafts folder as I can only post a max of 4 posts per day for this marathon. 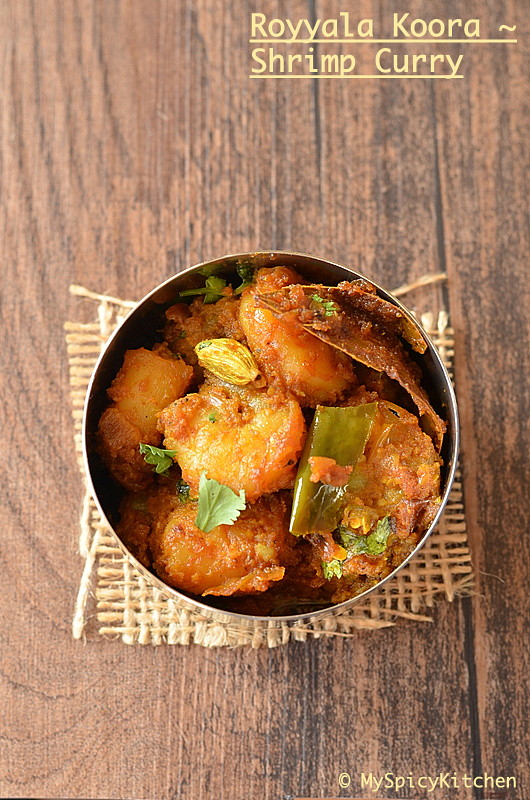 I had initially planned on doing only 3 curries including dal, as that is what is cooked in most of the households on a given day. Off course the number of curries cooked on a given day depends on the size of the family. Though I had three curries on my menu, I was not satisfied with 2 dry curries & 1 dal. I wanted one more gravy & was debating between pulusu & shorva. Shorva or shorba is one of the gravies or stews cooked very frequently in my house, at least 3-4 times a week, may that be veg or non veg version. Since I already have mutton, chicken, tomato, sorakaya, I made cauliflower shorva. 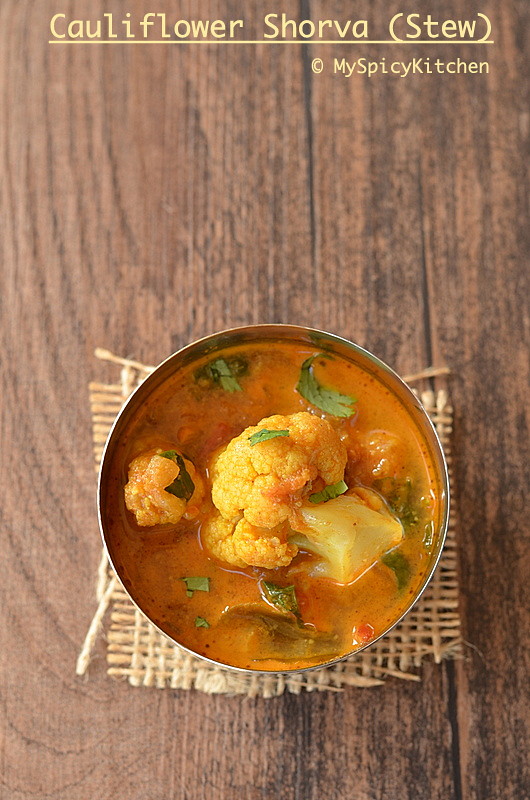 Even number of curries on the menu did not sound good to me and to make it an odd number, decided to do a pachadi, which would make the meal complete. I decided on coconut pachadi as this was one of the most often prepared pachadi when I was growing up. I was debating on sweet & left it to be decide on the day of cooking, depending on my patience. I made homemade yogurt in a bowl to go with the thali bowls. A South Indian meal is incomplete without yogurt or curd, unless you are like me who does not like yogurt. 🙂 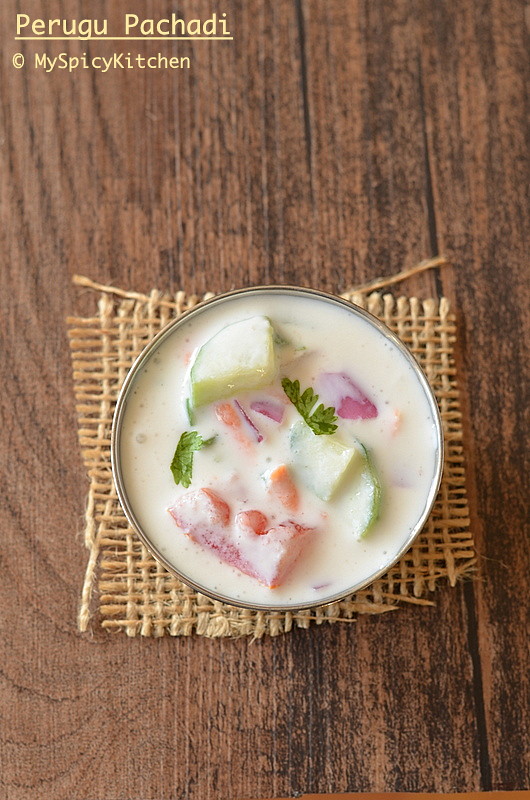 I prepared the meal last Sunday & that morning I casually mentioned to Mr. U that I considered bagara but since I am cooking so many curries it would be a waste. The second I mentioned bagara to husband , I knew I was in trouble. He wanted me to make it. As I was cooking so many items, I saute the vegetables, rice for bagara on stovetop and finished rest of the cooking in the rice cooker. Since I was making bagara, I made raitha to go with it. Since I was cooking so many dishes, I thought I might as well do a sweet & made sheera. 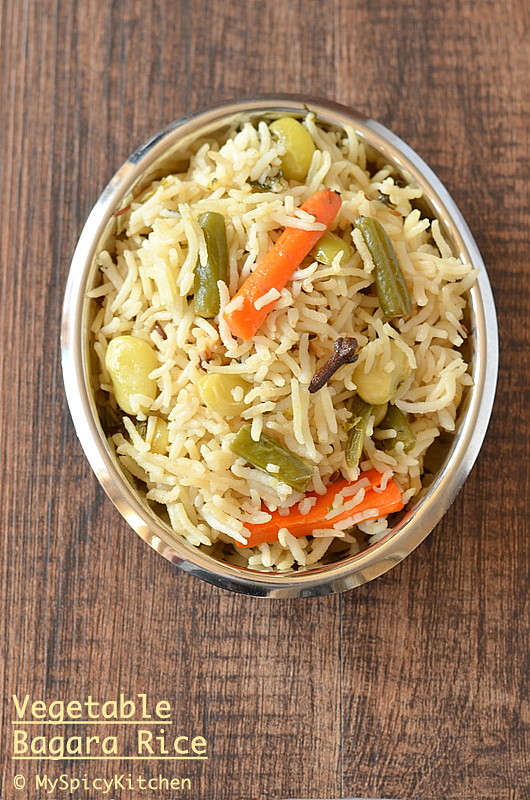 Dishes got added to the menu on the day I was cooking. Had I planned the menu better, I would have made chicken shorva or mutton shorva as we love it with bagara. However, the purpose of this meal is to showcase daily curries cooked at my home & these indeed make it to the dining table on a regular basis. I hope you relish the thali or the food on today's menu.